The Vinnytsia Railway Station is one of the busiest in Ukraine. About 2.6 million passengers arrive and depart during the year. The square should become more comfortable for pedestrians, but the dominant function of this space is to serve such huge passenger traffic – fast and comfortable transit from the railway station to any part of the city. It is also important to create the infrastructure for the buses that depart from the square. Thus, Pryvokzalna Square has the potential to become the main transport hub of the city.

The first mention of the railway station was in 1870, when the newly built railway passed through Vinnytsia, significantly improving communication between Odesa, Kyiv, Moscow, and St. Petersburg and increasing the turnover of commodities. The station was located on the outskirts of the city, at the end of Oleksandrivska road (now called Kotsiubynskoho Avenue). It was a wooden church-like structure with a bell that rang on the arrival and departure of each train. There was a market area near the station. 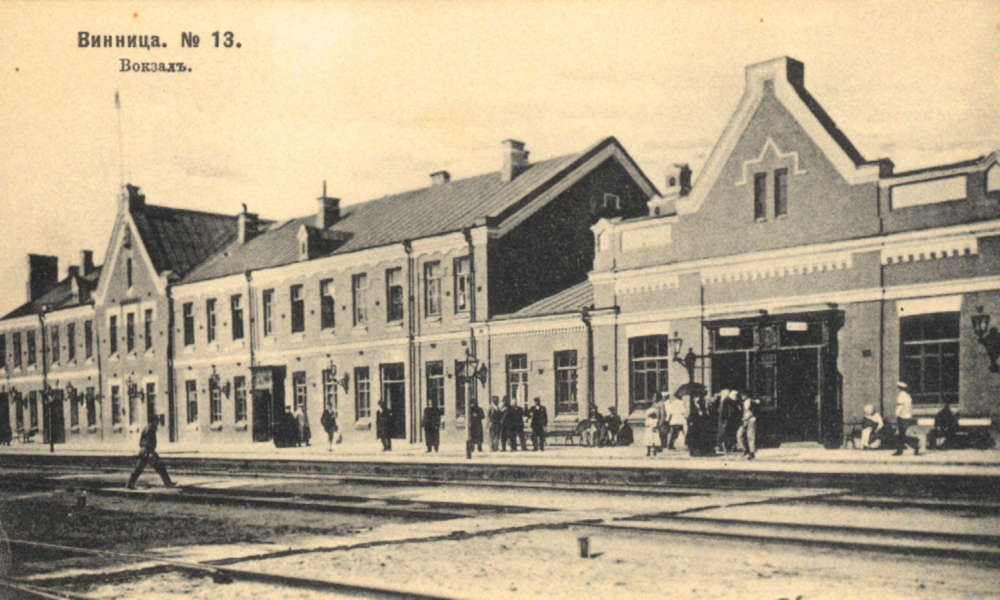 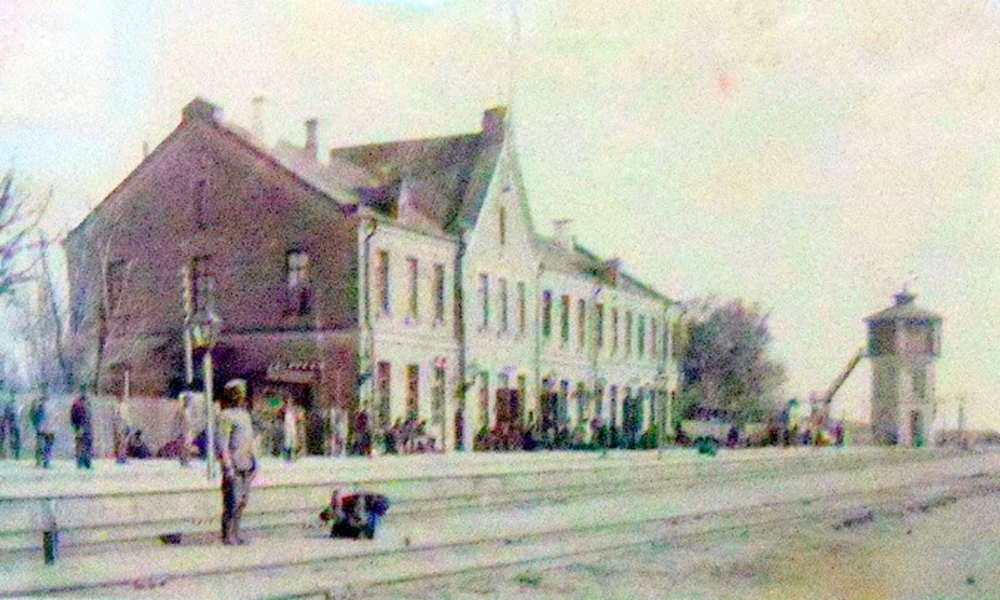 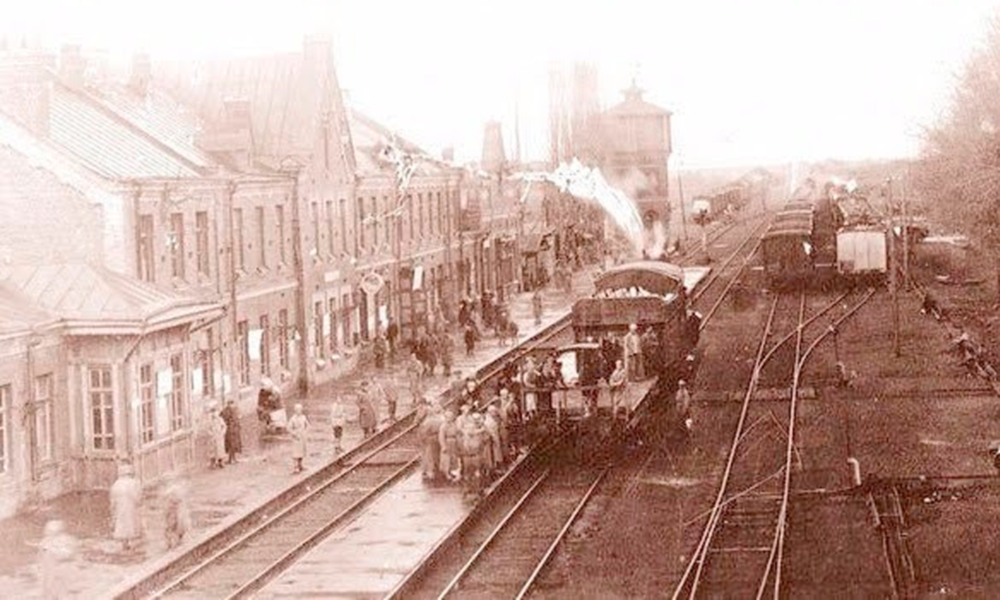 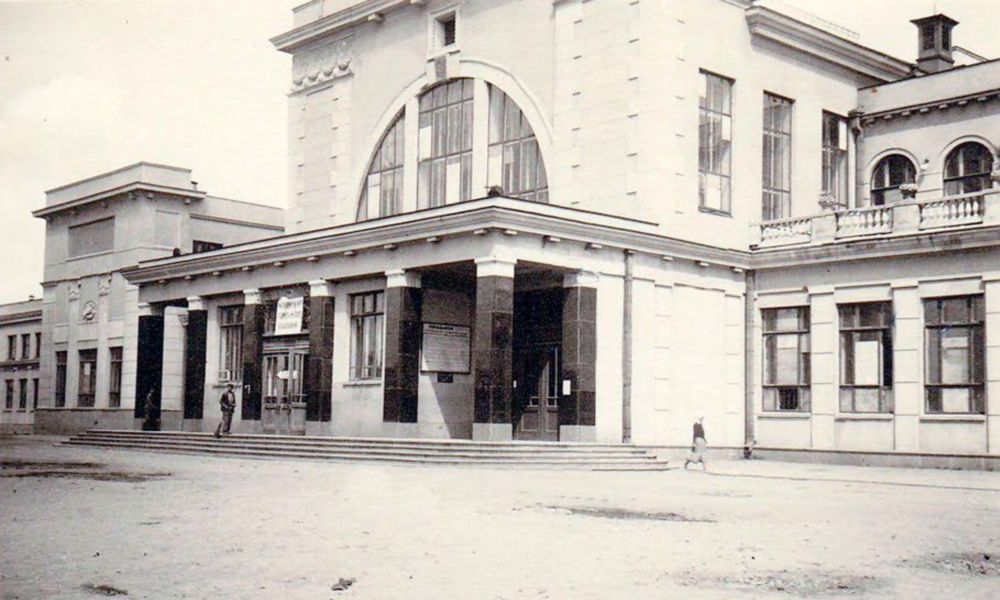 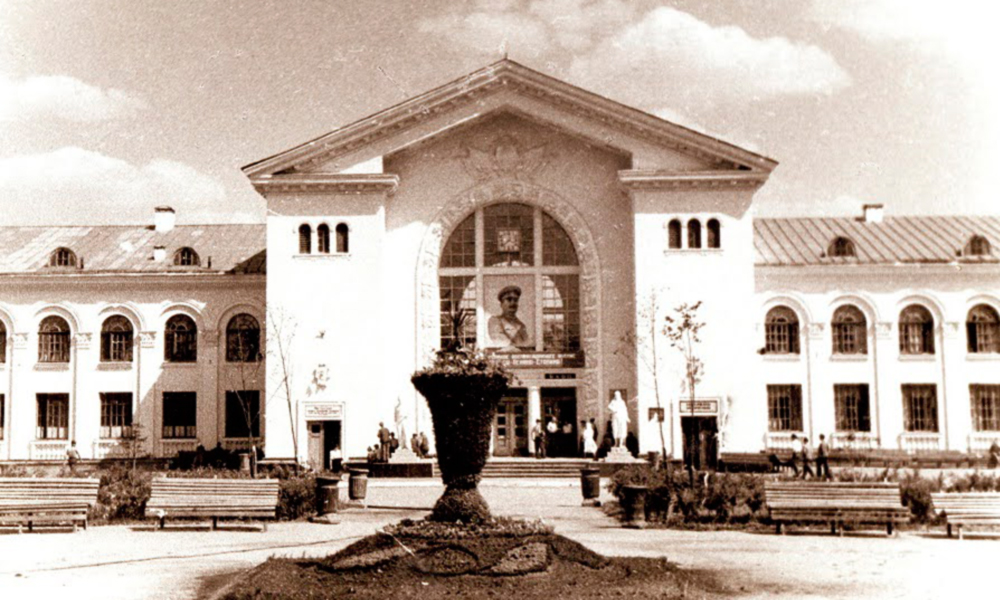 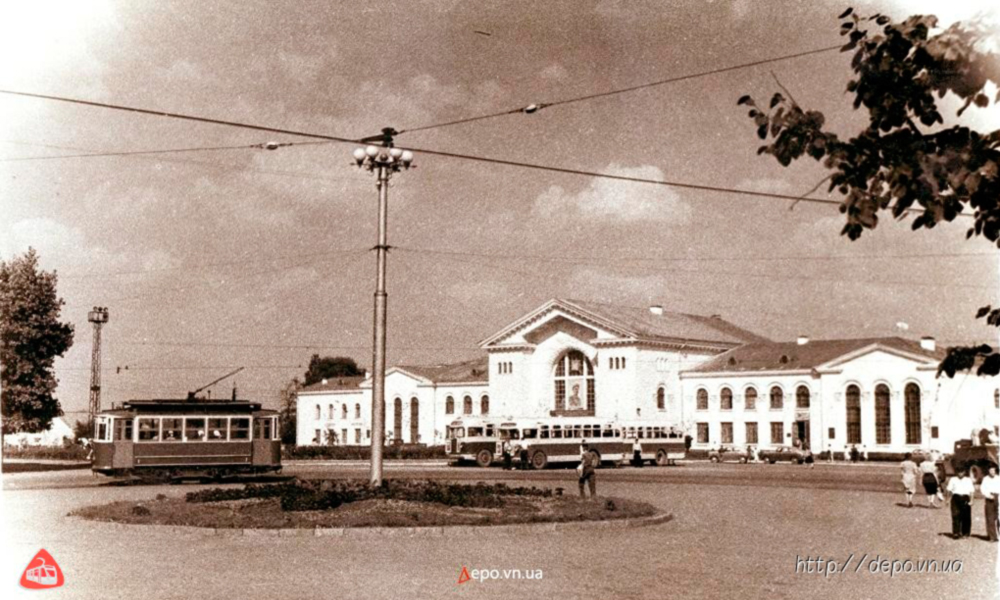 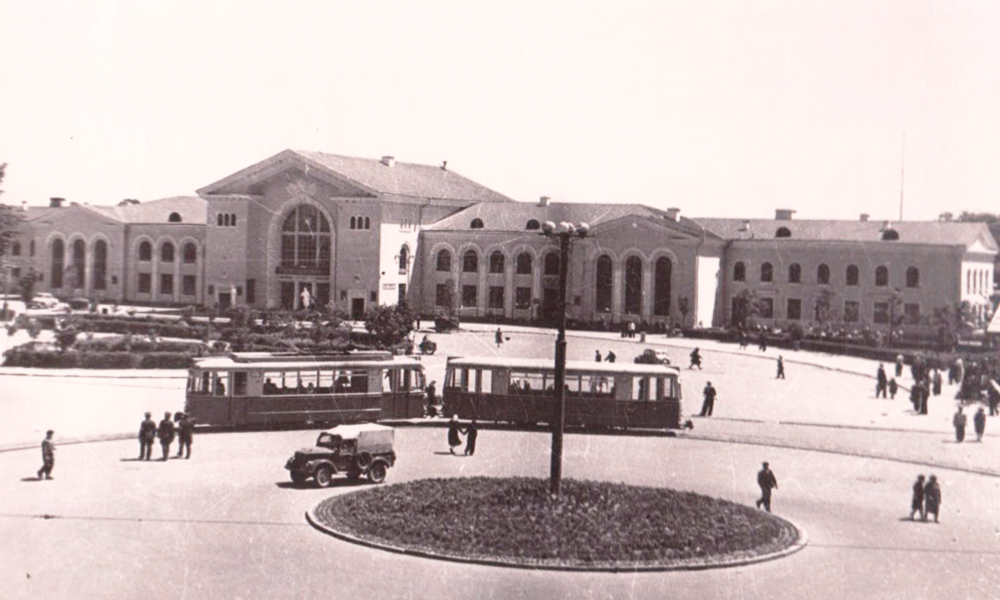 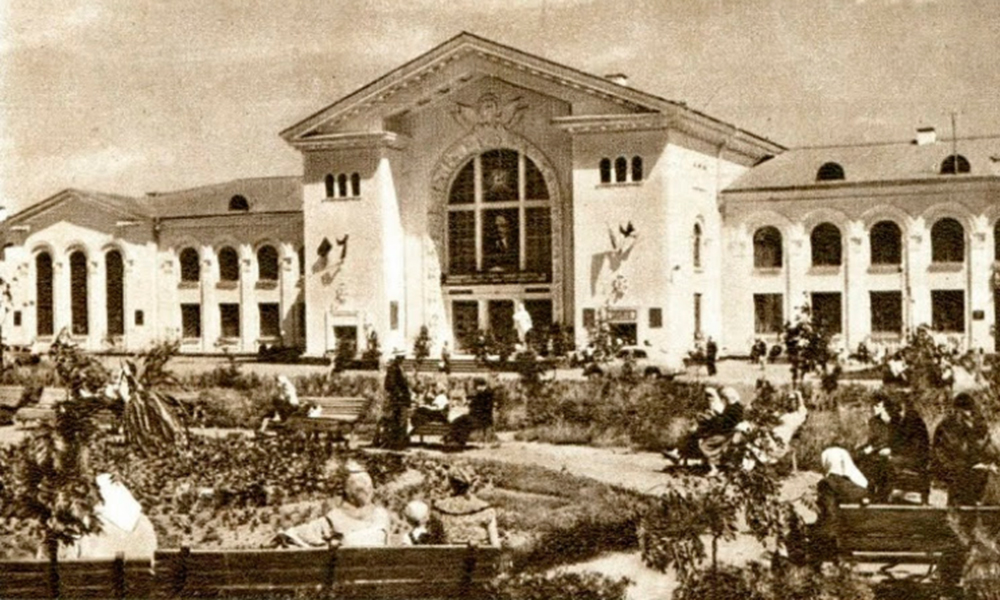 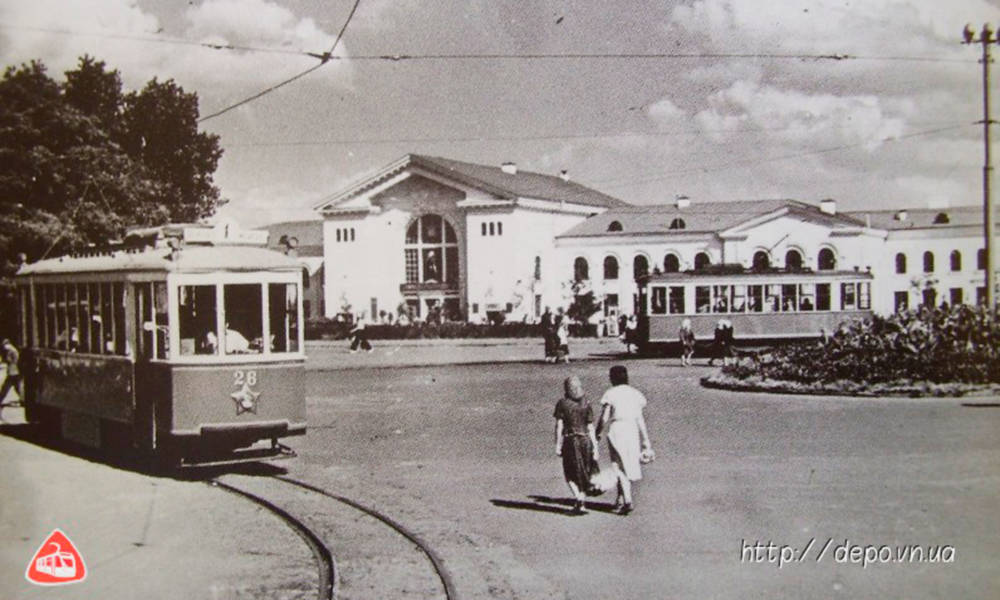 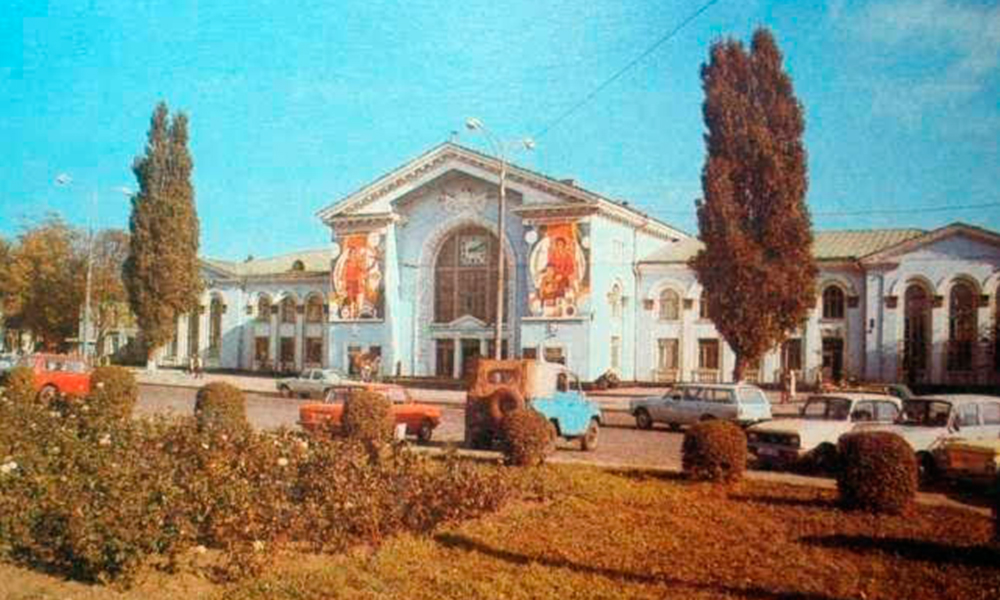 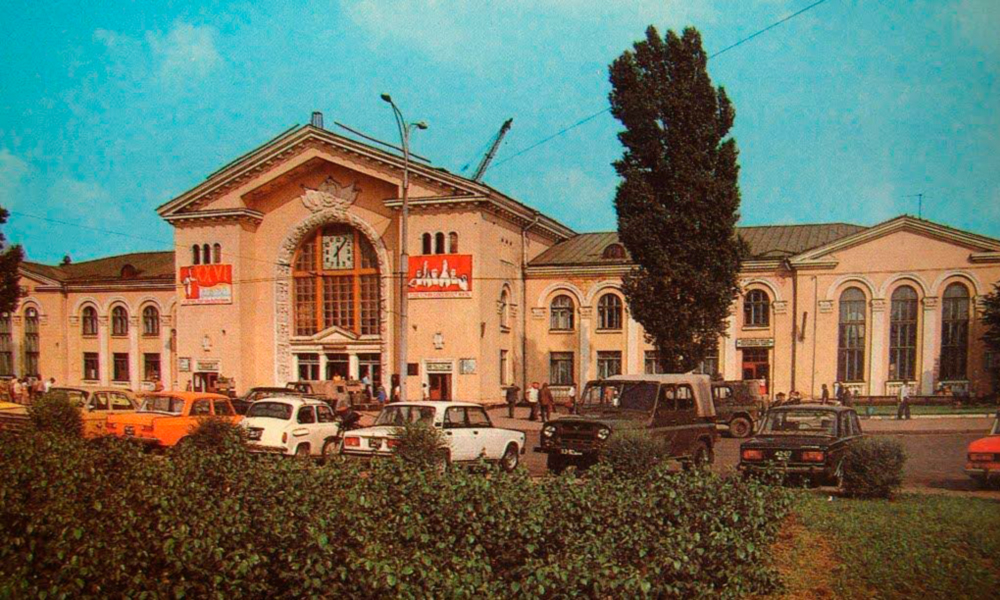 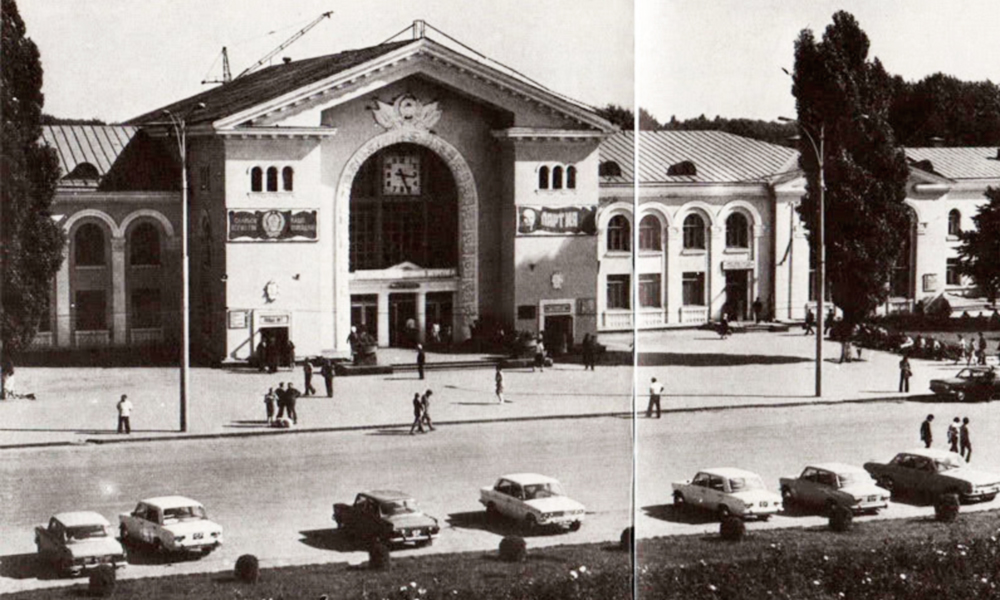 The first stone building of the railway station was built much later, at the end of the 19th century. It was a small building that was big enough for the small provincial town.

In 1913, the first city tram started running from the station along the route Railway Station – Girl’s School (now School No. 2).

This station witnessed the revolutionary events of 1917, and survived the years of the Civil War. In 1919, the Vinnytsia Railway Station housed the headquarters of the Second Ukrainian Division lead by N. A. Shchors.

In 1932, Vinnytsia received the status of a regional center. Therefore, in the mid-1930s, it was decided to build a new big railway station.

The third building was built around 1939. The new station saw the socialist city grow and develop rapidly over the course of several years. The platforms and halls of the station building were becoming less crowded with uniformed men. There were more and more civil people: students, professionals coming to our city to build new factories, girls in summer dresses going to the seaside.

Based on its design and prospects, the building could have served the residents of Vinnytsia to this day, if it were not for World War II. In 1943, during the retreat of German troops from our city, the station was blown up. The only thing that survived and was used until recently was a pedestrian bridge (dismantled in 2005).

The restoration of the station began immediately after the war, in 1945-1946. The new building was commissioned in 1952. Two statues were placed in front of the entrance: a worker to the left if the entrance, and collective farm girls to the right. Unfortunately, they have not been preserved to this day.

On October 29, 2002, the reconstruction of the station began. Since then, its appearance has not changed much.

For a city resident, the words Pryvokzalna Square are most likely associated with a large number of chaotically parked private cars. Maneuvering among them, public transport brings railway passengers and market visitors.

At the moment, there is no direct and fast transfer between different types of public transport. For example, if a trolleybus or a bus can drop off passengers almost at the entrance to the station, tram users have to walk additional 230 m. When you are trying to catch a train carrying a suitcase, such additional walking distance is time consuming. On the other hand, those who arrive in Vinnytsia have to cover some distance to the trolleybus and bus stops. And the tram stop is not even visible from the station exit. 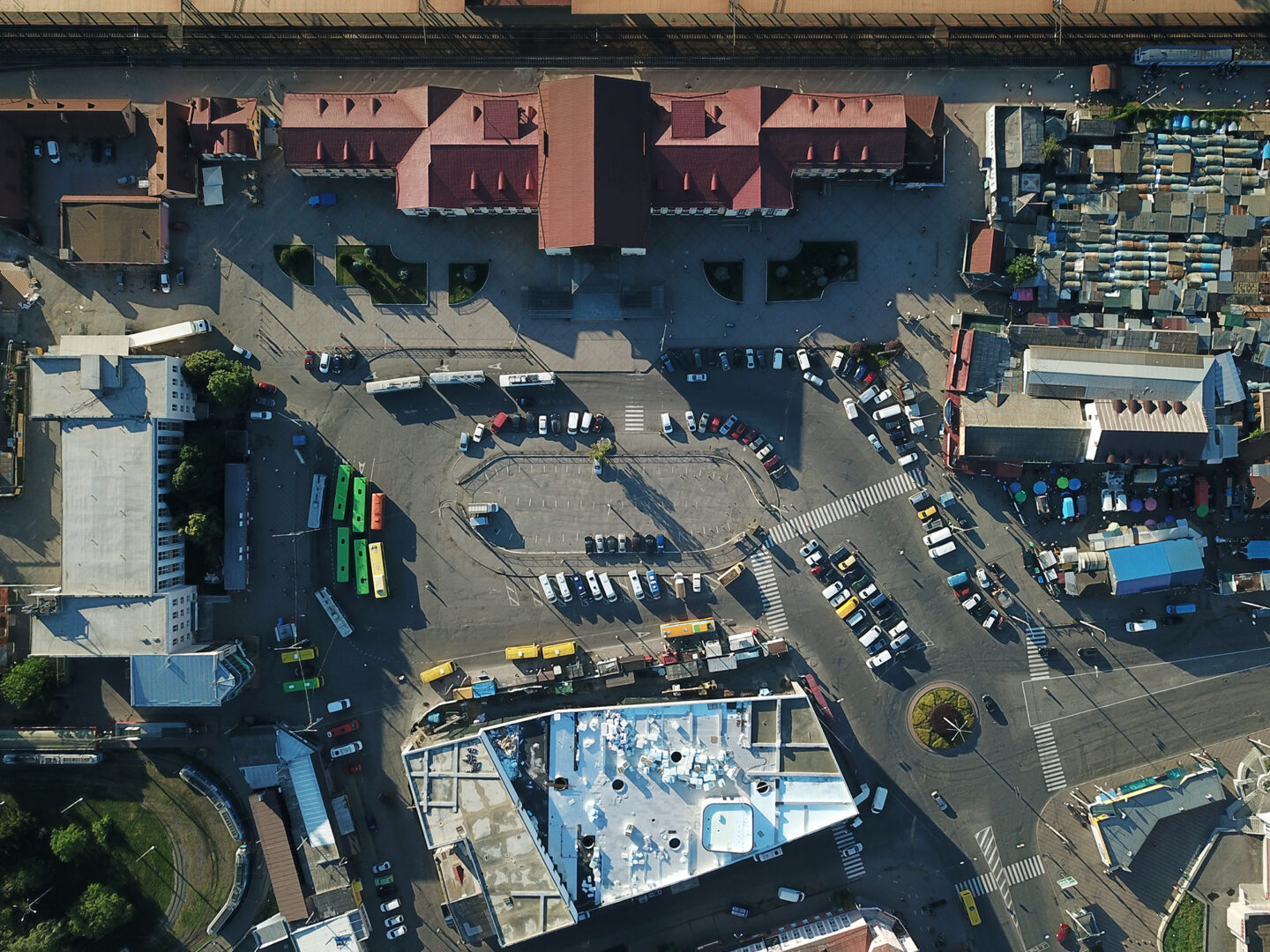 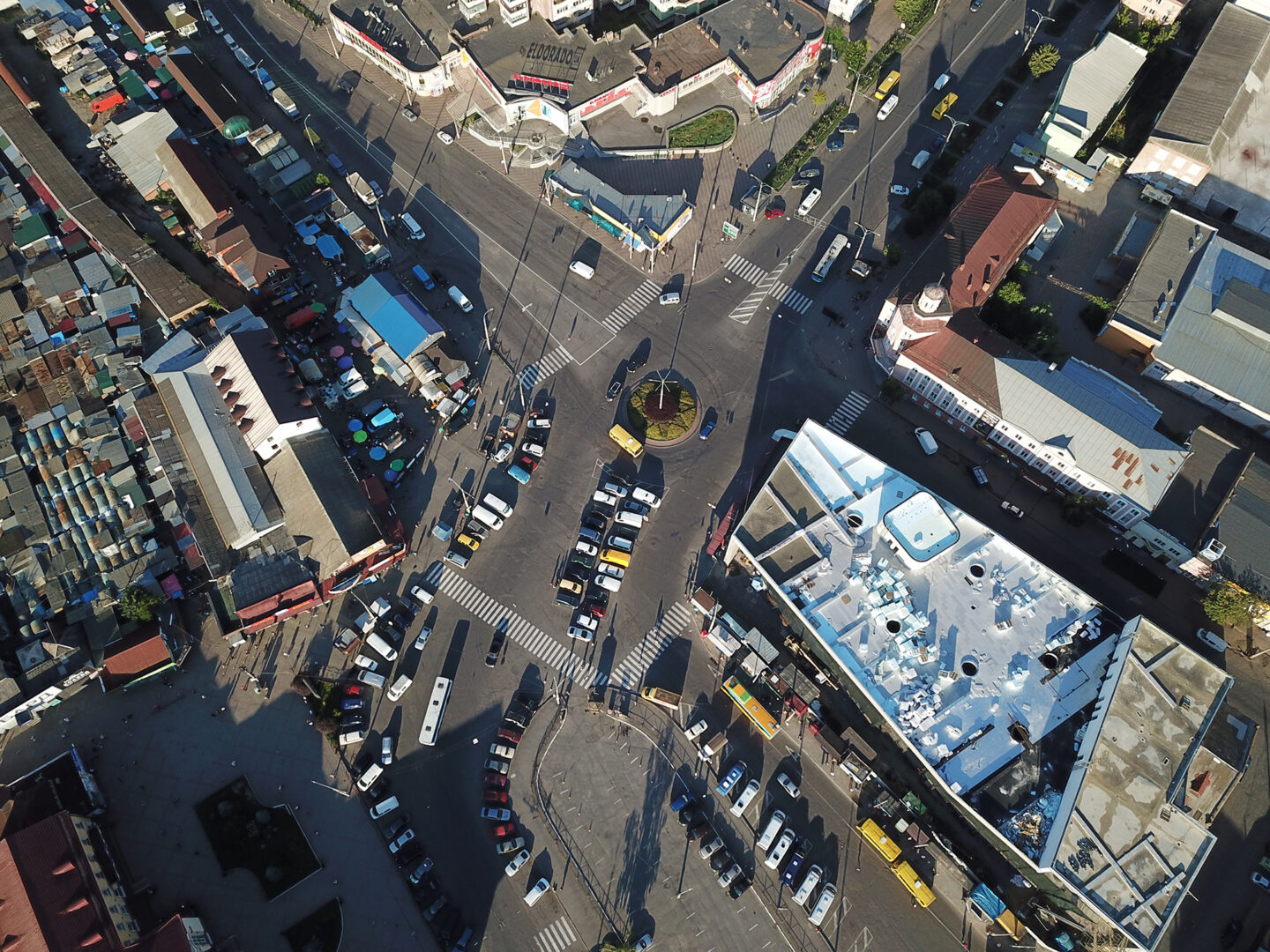 The complexity of navigation on the Pryvokzalna Square, or rather the absence of any navigation, should be emphasized. By the location of public transport stops, it is difficult to understand where the passengers are picked up and where they are dropped off. For now, you can guess it by observing people who know where to go.

It is also important to pay attention to the fact that on a hot day or in bad weather, it is not quite comfortable to wait for public transport or just to be in the square. There are very few trees on Pryvokzalna Square and no shelter from the weather elements. Moreover, the public space in front of the railway station does not meet the needs of people waiting for their train or waiting to pick someone up, or just wanting to spend some time here.

The location of the tramline in the middle of the street allows to create an efficient public transport lane. Space for short-term parking will be available near the sidewalks. Bike lanes will be separated by wide pedestrian zones creating connections between the street space and the buildings (integrated use). The intersection with Batozka Street will be reconstructed into a traffic circle, which will also be equipped with traffic lights to ensure the free passage of trams.

The concept provides for the reconstruction of Pryvokzalna Square, mainly increasing the sidewalk area and the green space, and setting up new places for public transport stops that will be convenient for passenger transfer.

“The project aims to turn the railway station into the main entrance gate of the city which will highlight its status of a regional center and a city with the highest quality of life in Ukraine. As a hub for national, regional and municipal transport, as well as due to its diverse use, the railway station area is used by the whole population of the city and can be considered to be a kind of commercial center of the city and the region,” Urs Thomann, Swiss expert in spatial urban planning, co-founder of CANactions School.

Trams, trolleybuses, and buses will be allowed to move in both directions. Private vehicles will only be allowed to drive in one direction to prevent them from entering public transport traffic areas. There will be only a small number of short-term parking spots in the square. The paid long-term parking (Park + Ride) will be located to the north of Pryvokzalna Square, where the tram turning circle is now located which will become unnecessary. 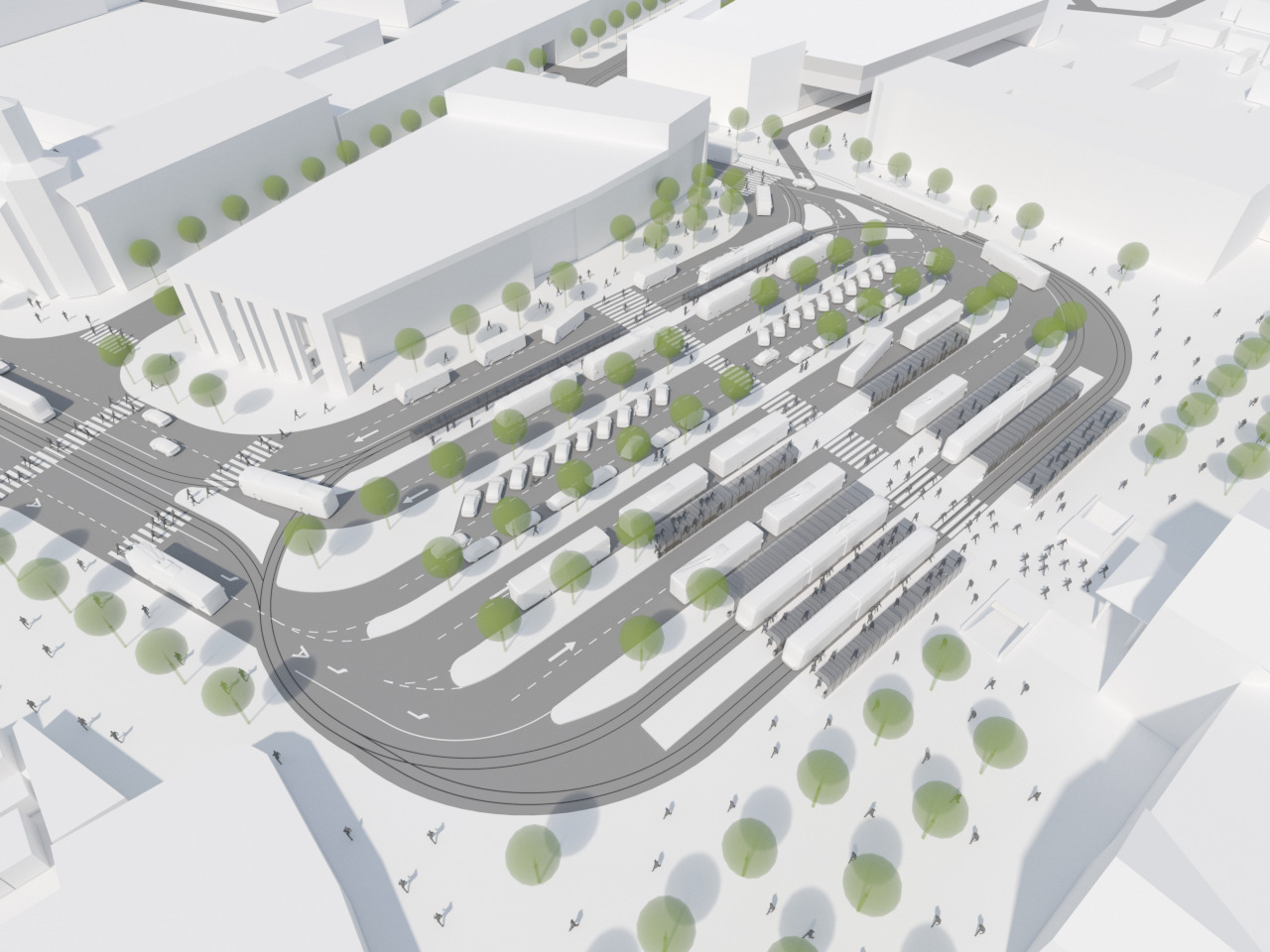 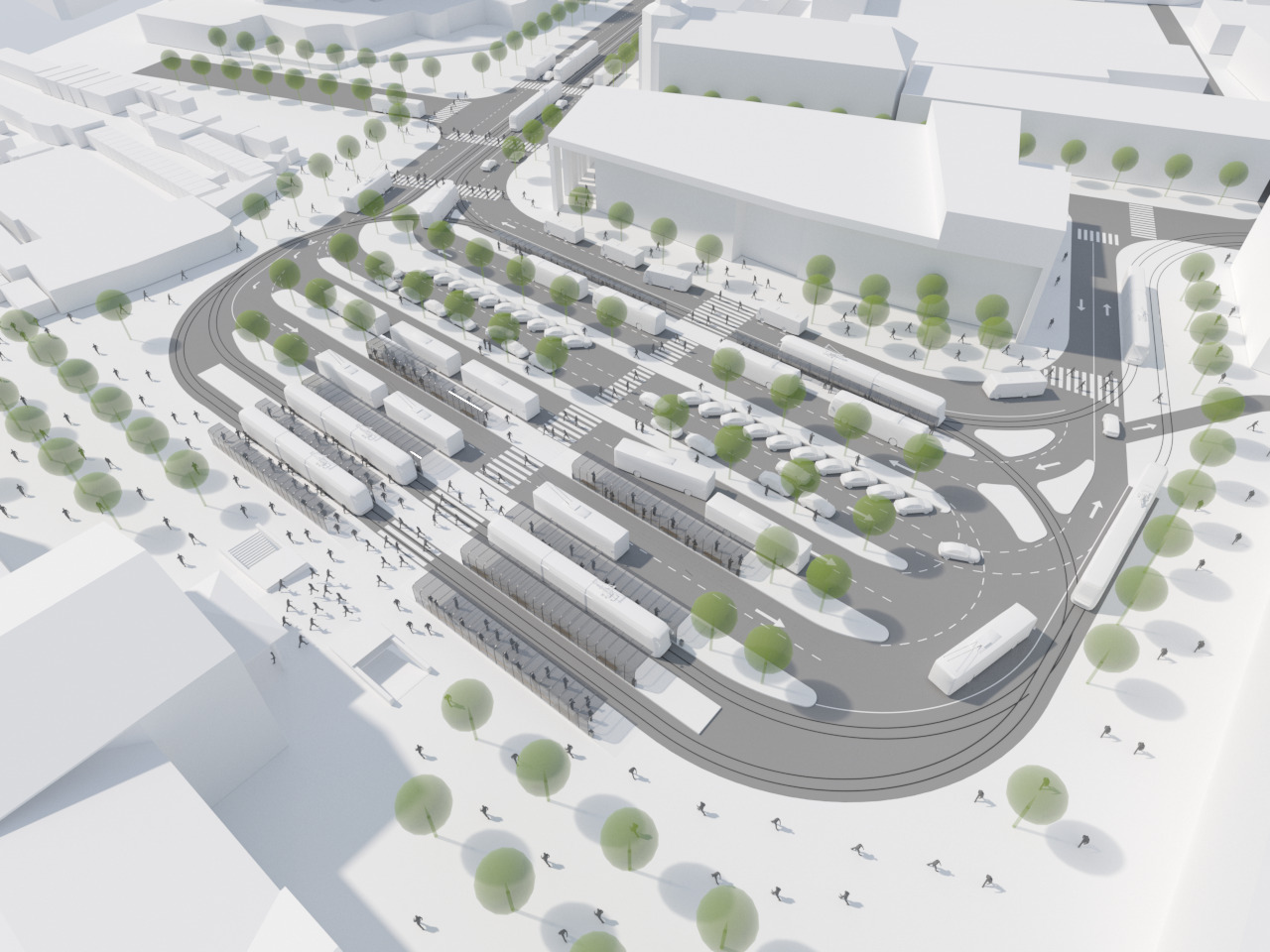 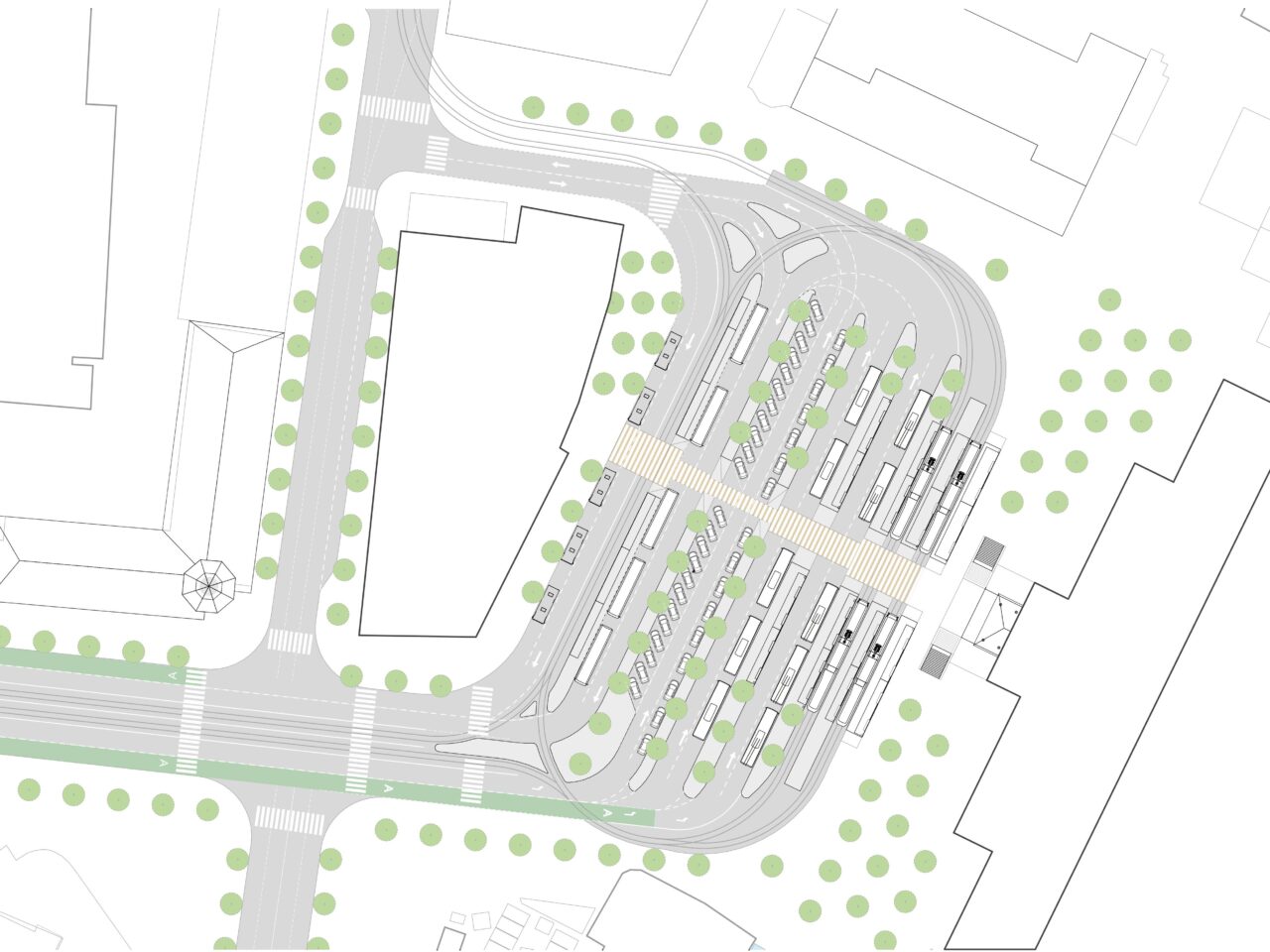 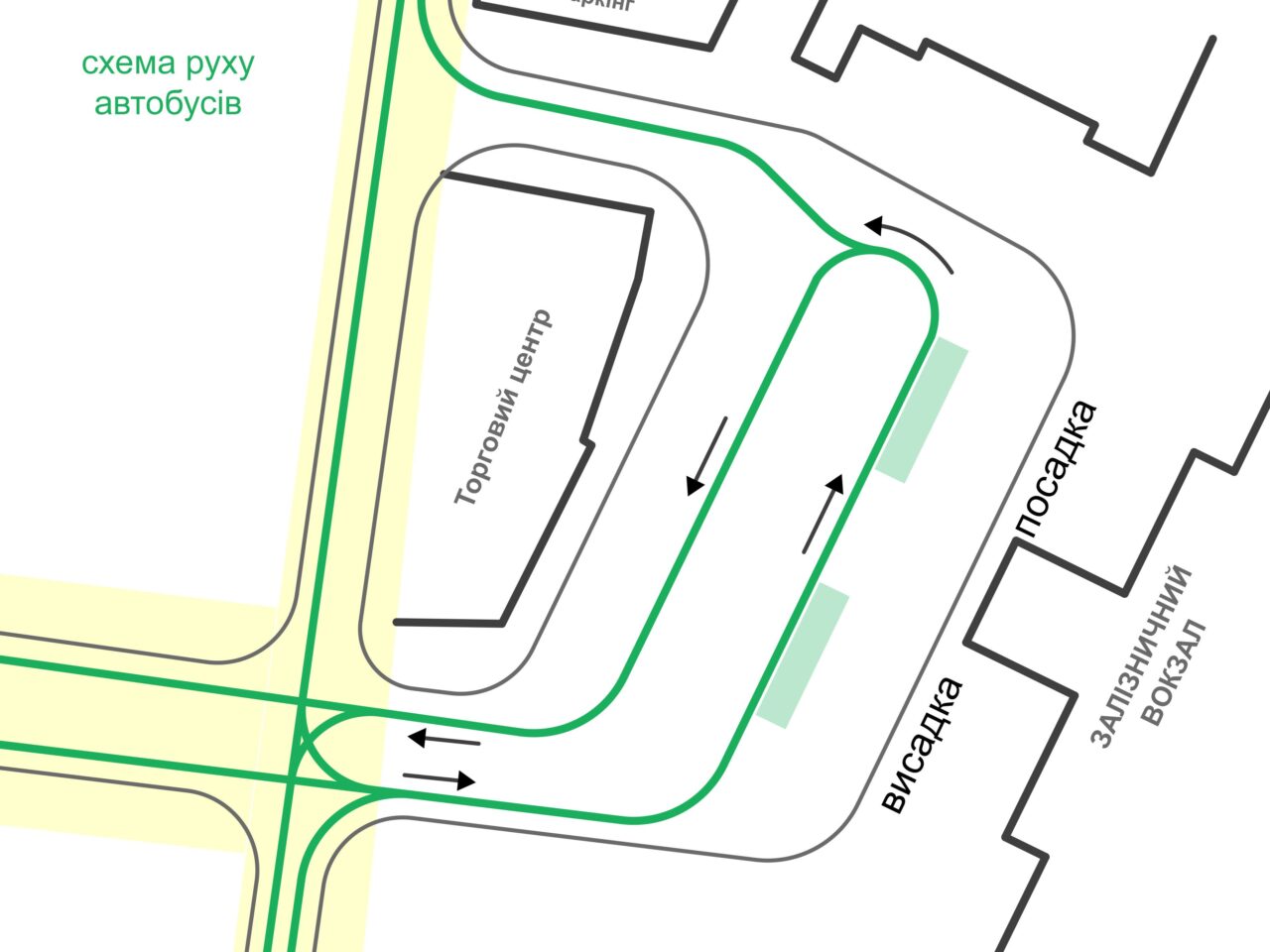 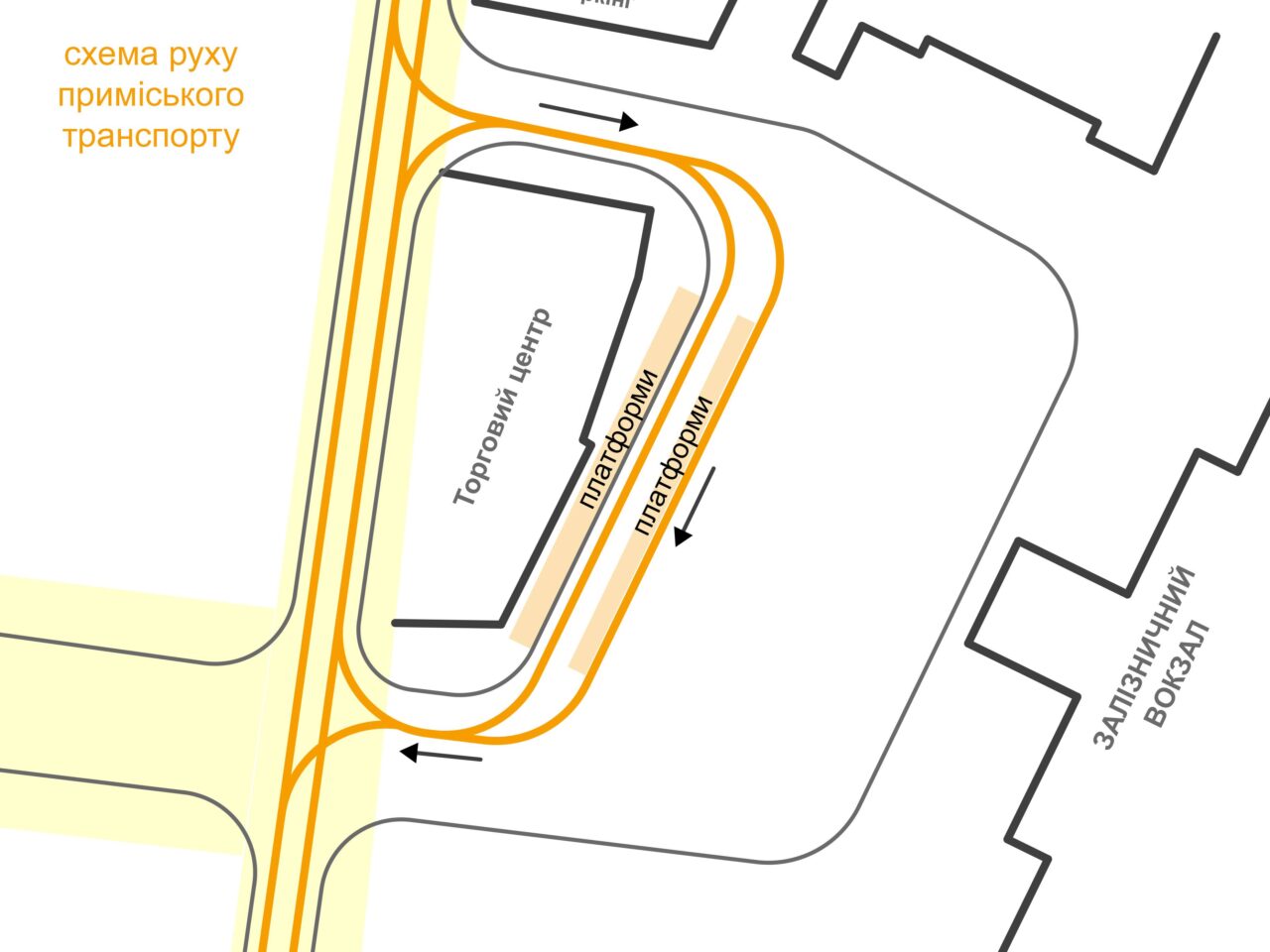 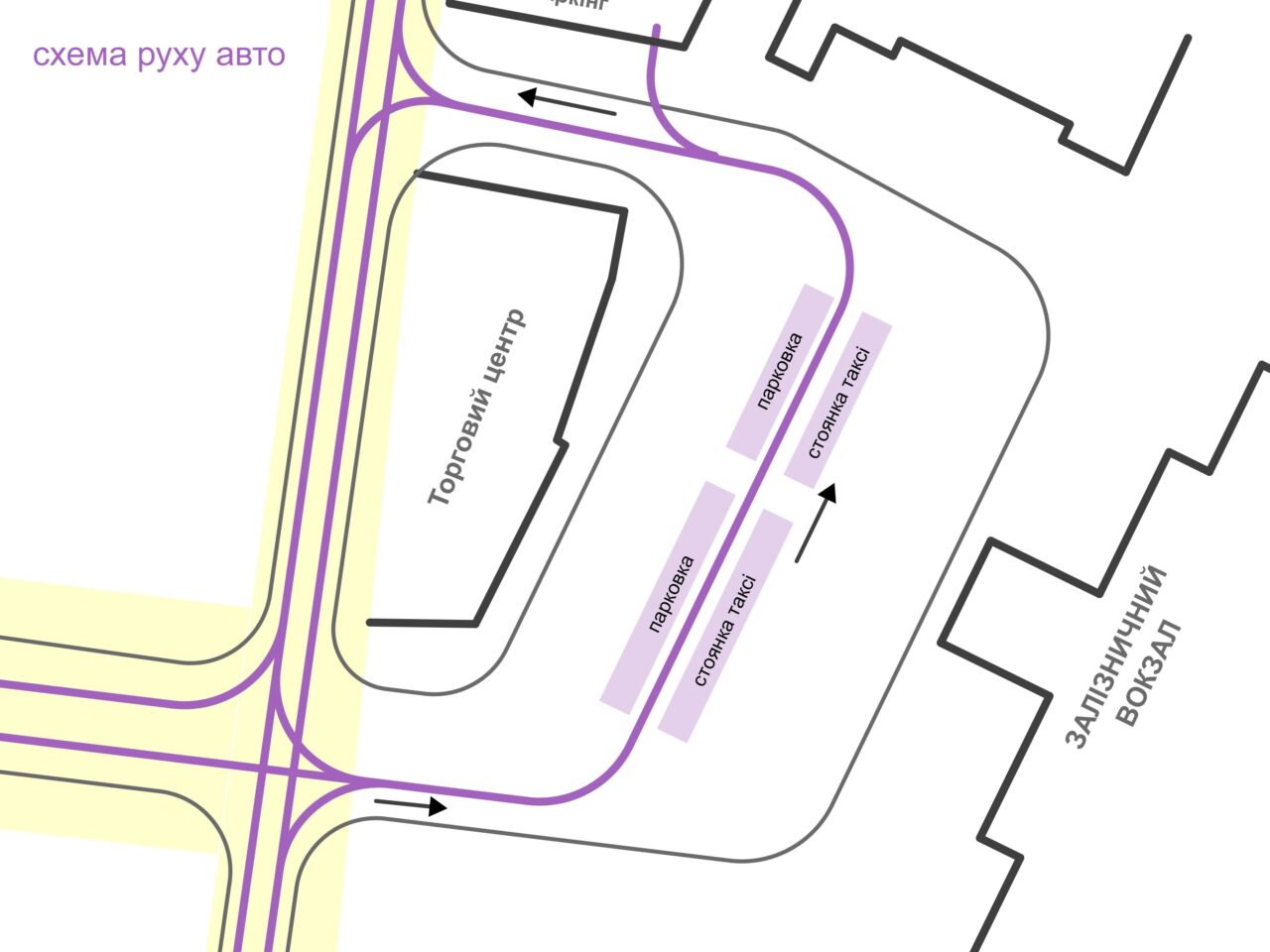 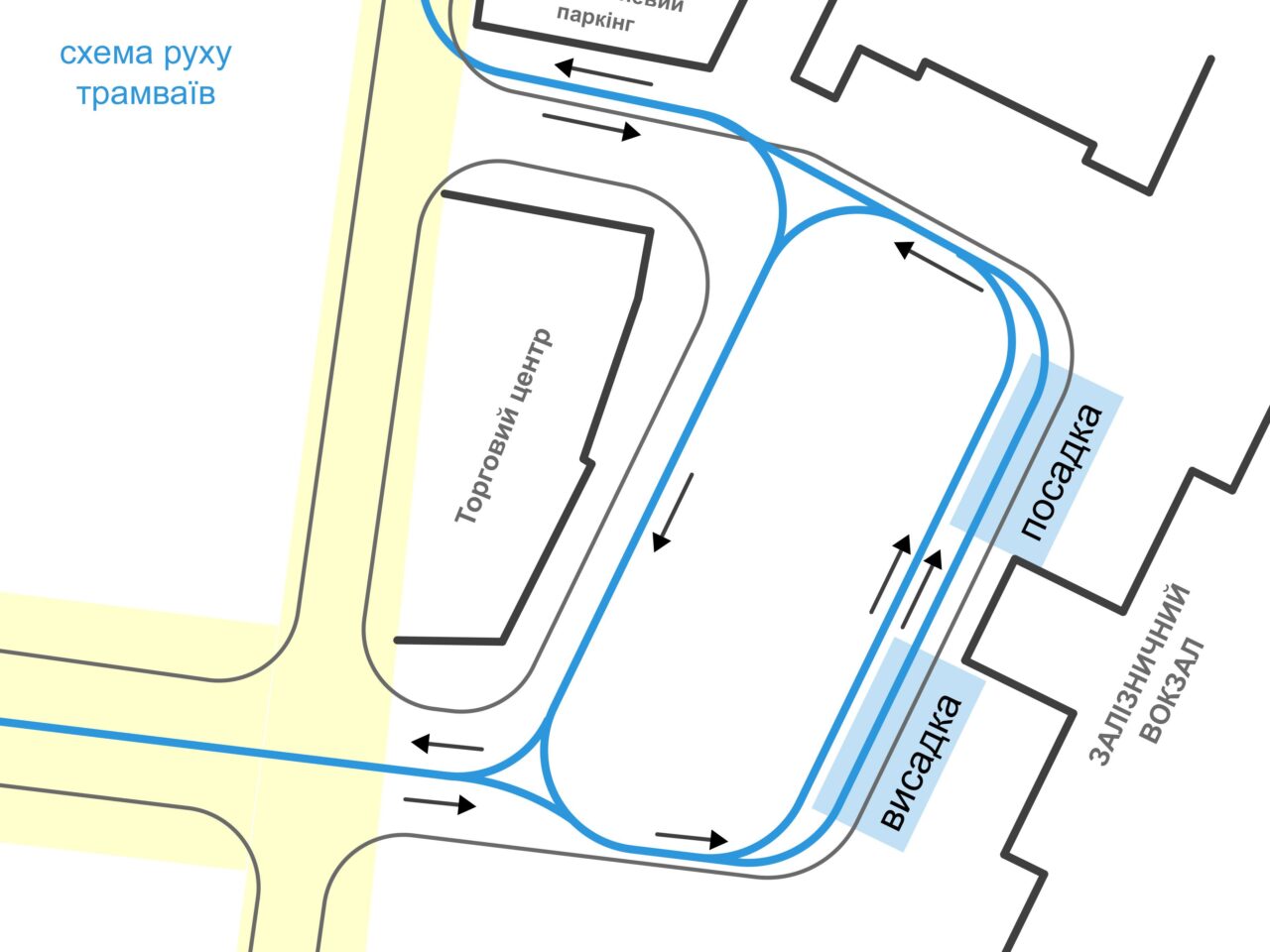 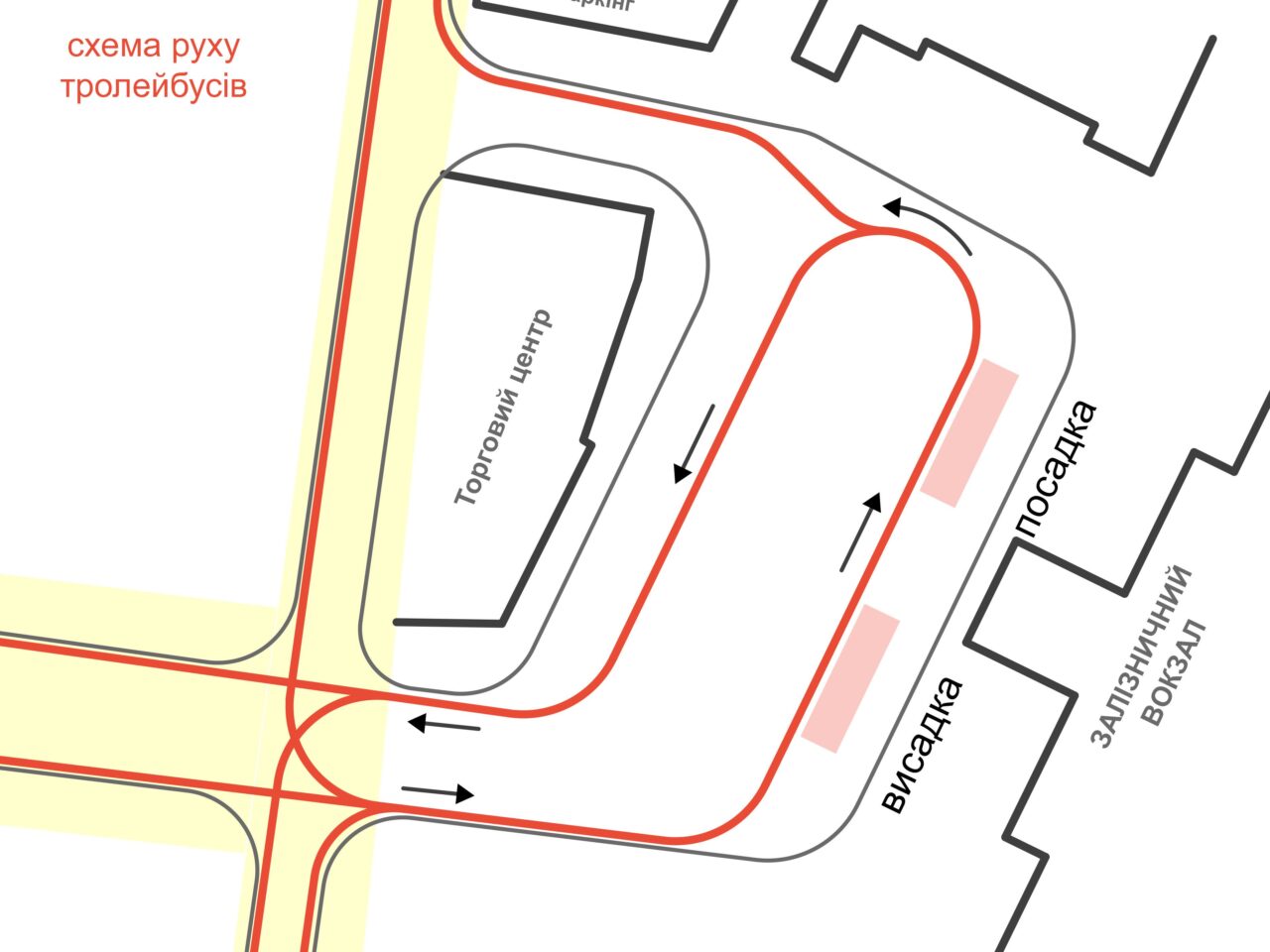