Khimik Park is a local park in the northeastern part of the Zamostia district, the only park in the district. This is the park which made local residents line up against development. In 2018, the project Reconstruction of Khimik Park became a demonstration project within the framework of the project Integrated Urban Development in Ukraine, which is implemented by the German government company Deutsche Gesellschaft für Internationale Zusammenarbeit (GIZ) GmbH. Employees of the Institute of Urban Development, together with residents and experts, created the concept of the park, and design documentation was prepared accordingly.

The creation of the Khimik Park was directly associated with the Vinnytsia Sverdlova Chemical Plant (Superphosphate Plant) which was built in 1912.

In Soviet times, the plant employed up to 4,500 people. A whole microdistrict was built in Zamostia, a park was laid out and an apple garden was planted. The park had its own developed infrastructure, it was lit, trees were taken care of, the premises were kept clean. Every year in the spring, trees were pruned, structures were painted, flowers were planted and tree trunks were whitewashed. The green space was decorated with sculptures, namely: a bust of a pilot, a woman with an oar, a boy with a pipe, a monument to a chemical industry worker. The park was part of a large complex that also included a sports and fitness center and a stadium. At the sports and fitness center (late 1980’s), there was a winter ice rink with a wooden rink board. In the park, there were ticket booths, a children’s playground, an outdoor dance floor, an open-air theater, a sports area, an obstacle course, a handball field, a tennis court, a recognition board, locker rooms, and a fountain. The playground was a place for summer leisure activities not only for children, but also for adults. Ticket booths were located at the central entrance to the Park. An outdoor dance floor was located behind the community center. Next to the recognition board, there were small stages. The open-air theater hosted amateur festivals, concerts, and open-air film screenings. The park had good lighting. The sports center was located at the end of the alley, on both sides. Figure 14. Military obstacle course. Where the current parking lot is located, there was a netted handball and volleyball field, where children’s football and handball club teams were trained. The fountain was located in the central part of the park. Two child sculptures were standing on a pedestal, and one of them was pouring water from a jug. The fountain stopped working in the late 90’s, even before the chemical plant was shut down.

The main annual event in the park was the Chemical Industry Worker’s Day. Employees of the plant cleaned the park, painted structures, planted flowers. The festivities always included concerts and award ceremonies. The catering service was provided, and a fair was organized. The festivities were massive and quite noisy. In figures 13-15, you can see photos of the park submitted by residents, which show: the fountain sculpture, the entrance to the park with a gate, as well as the condition and use of the main alley.

On the territory of the former sports and fitness center, there is now the Nyva Sorts Complex, which was built in 2010.

The way of park creation

Khimik Park is mainly used by residents of the district who live within a 10-minute walking distance and visit the park daily or several times a week. About a thousand people visit the park per day.

Local residents expressly perceive this area as “the only green recreational space” of the district, which is of great value to them due to greenery and recreational opportunities. The park is also appreciated for its clean, fresh air, for being a place for family walks and leisure. Many residents have nostalgic memories of the park.

In mid-2016, began the process of transferring Khimik Park to the Kyiv Patriarchate for construction of a church. Local residents were against this decision. For this purpose, residents began to organize community cleanups in the park. And in 2017, the community decided to submit a project to the Budget for Public Initiatives program the goal of which was to create a quality recreational space for local residents. However, this project was rejected at the preliminary review stage and was not put to the vote. This caused an uproar among the local community.

The situation with the planned construction began to worsen, and therefore, in April 2018, the Vinnytsia City Council instructed the experts from the Institute of Urban Development to study public opinion by holding public discussions.

Employees of the Institute of Urban Development held meetings with residents and monitored the territory. After that, an urban study of the park territory and part of the territory of the Zamostia district was conducted, engaging local residents, and the innermost needs of individual groups of park visitors were further studied.

The first meeting was attended by more than 350 residents interested in the future of the park.

Based on the information received from residents, the experts from the Institute of Urban Development, together with local experts, created 3 scenarios for the development of the park, which were offered to residents for voting.

The majority of residents voted for the 2nd scenario, Active Park. It should also be said that during that period, local residents got together to form a team to monitor the issues associated with the park.

The results of all studies formed the foundation for the basic concept of Khimik Park, which was adopted at a community meeting. It was the basic concept that was used by the teams of experts of the Architectural Workshop. 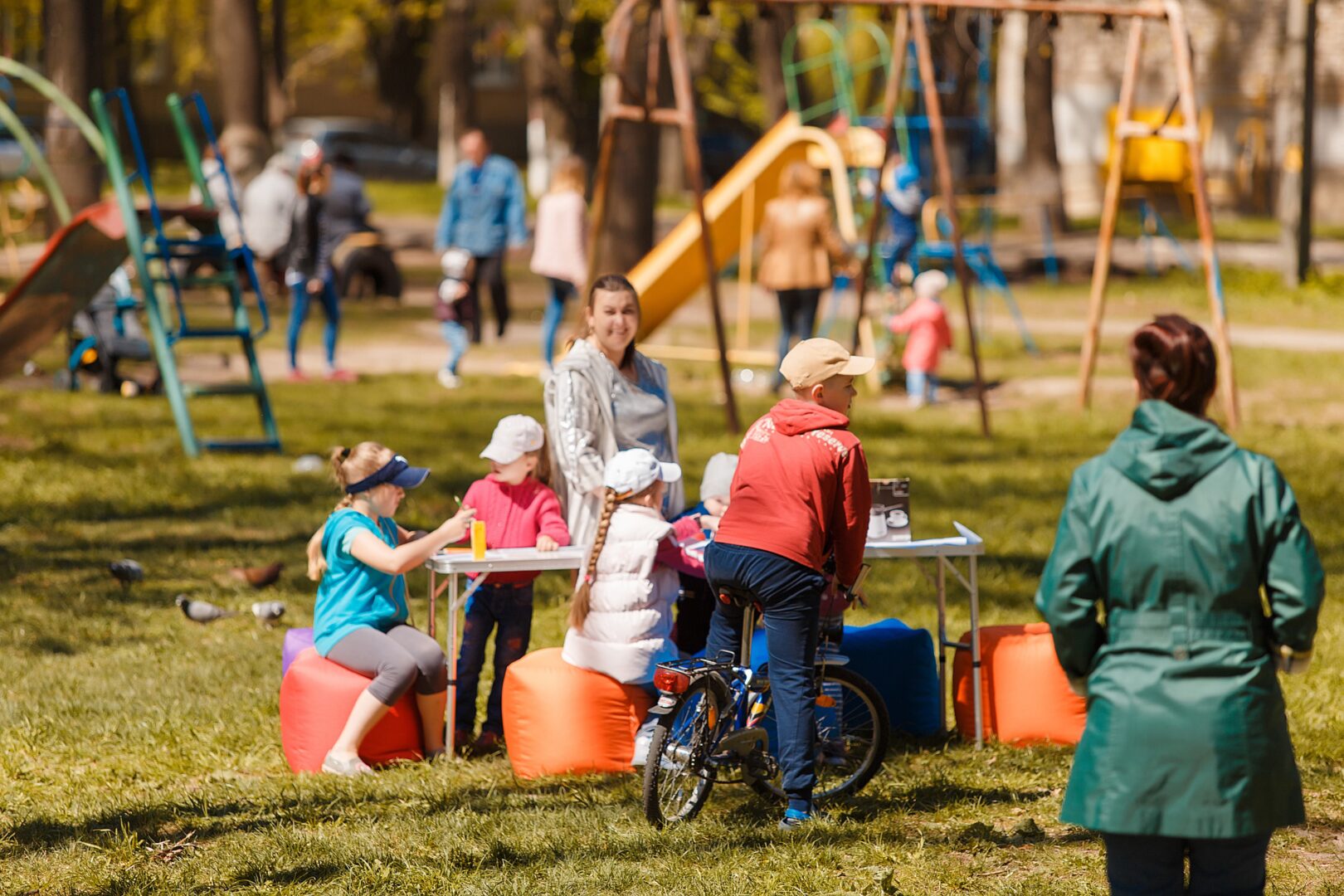 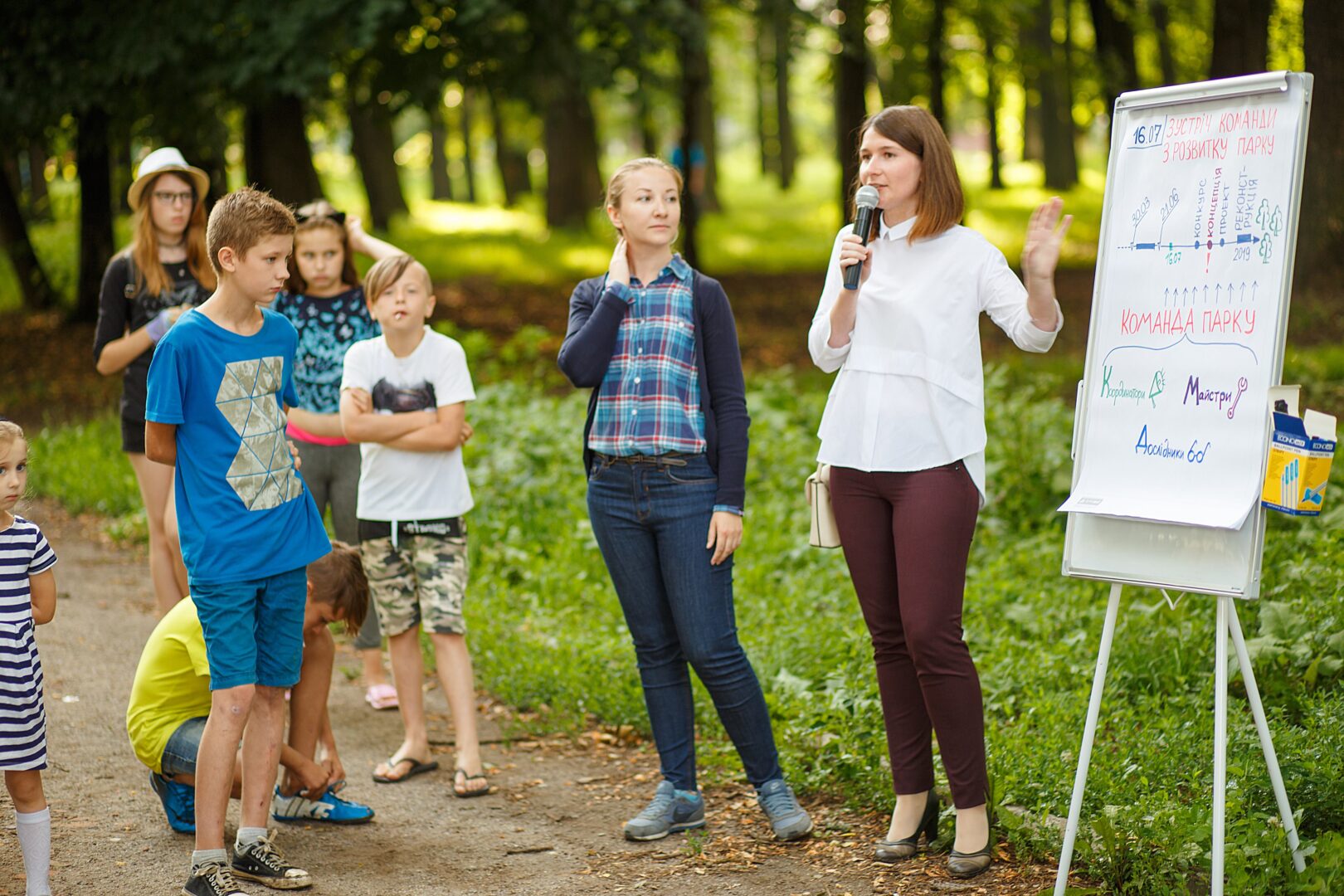 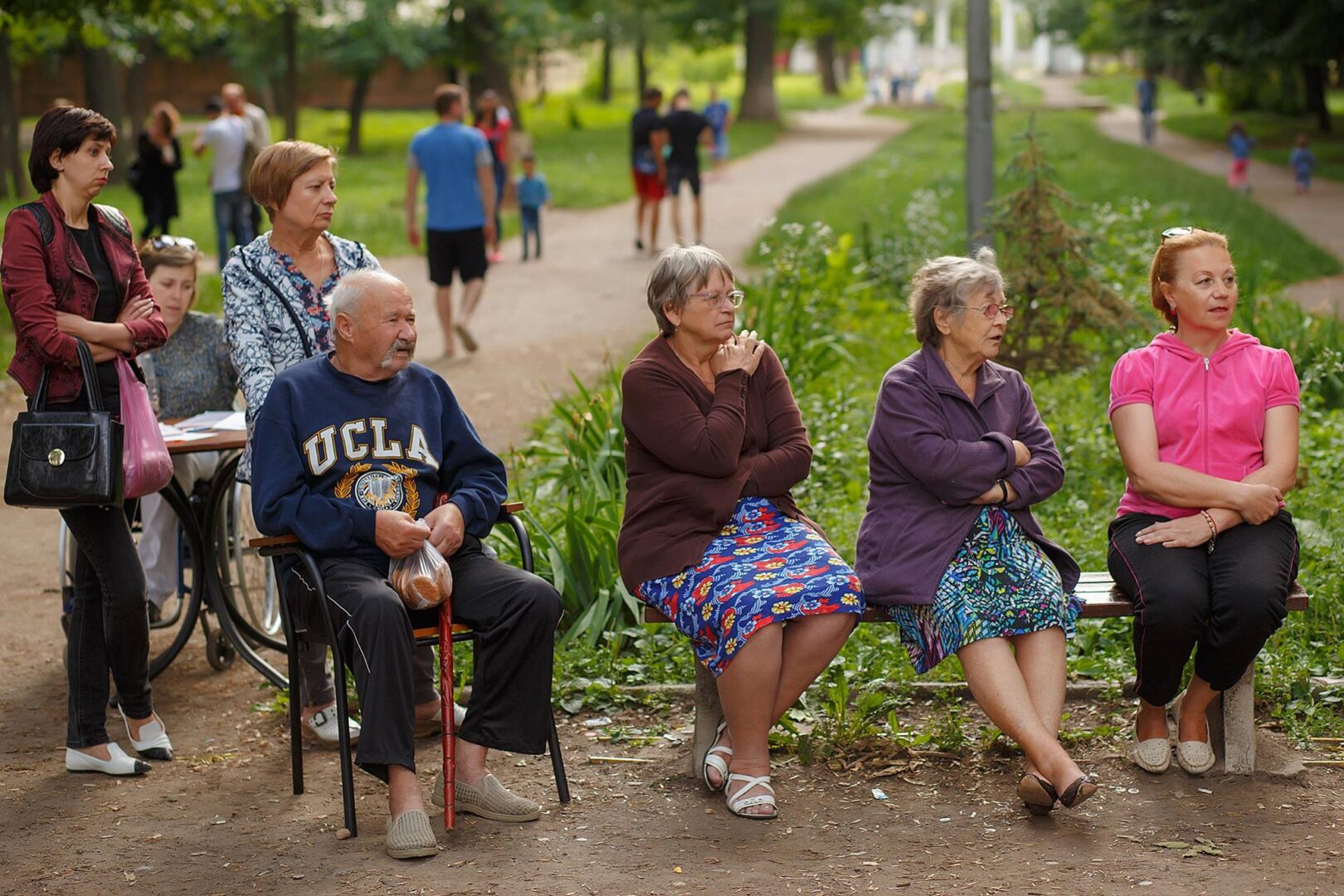 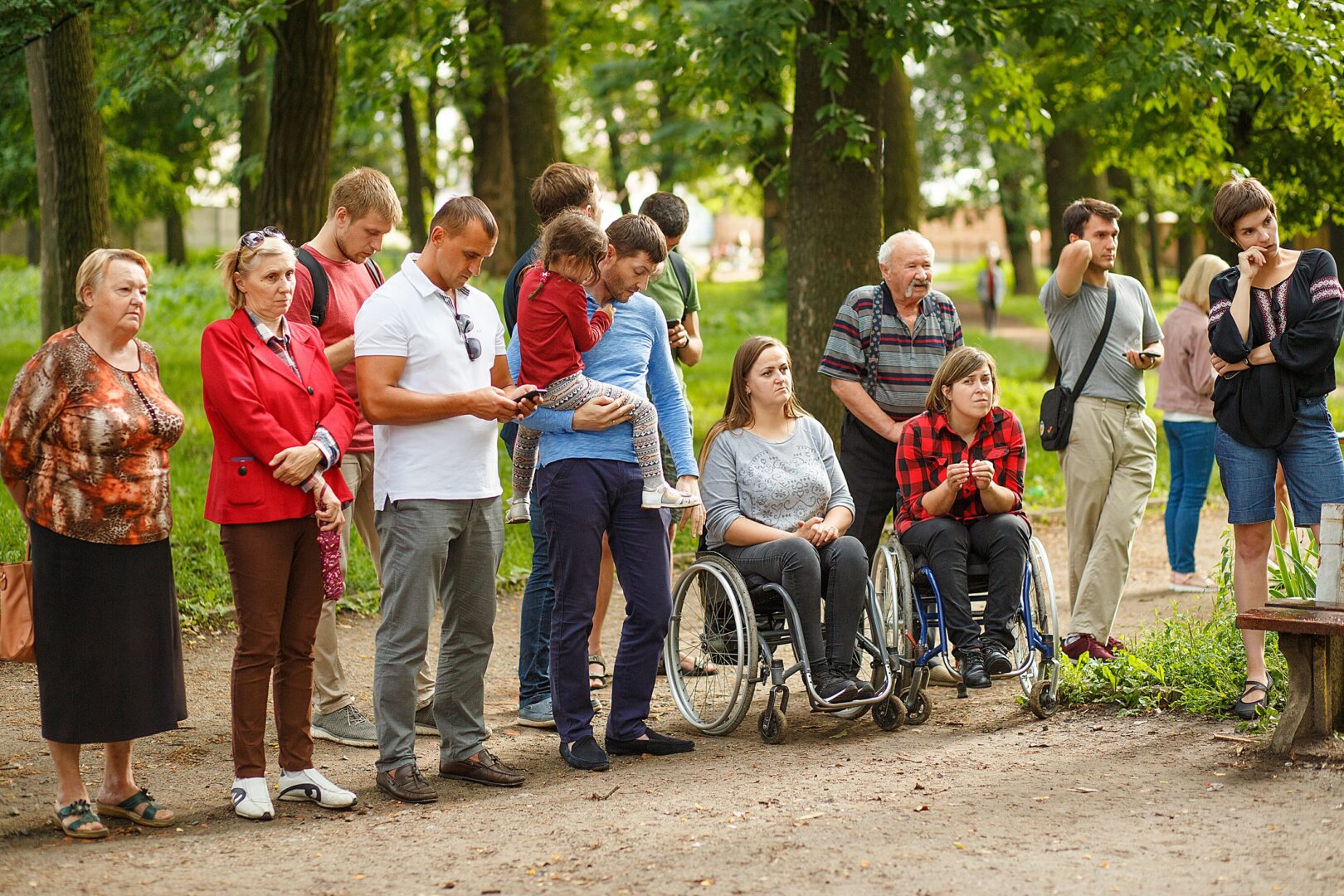 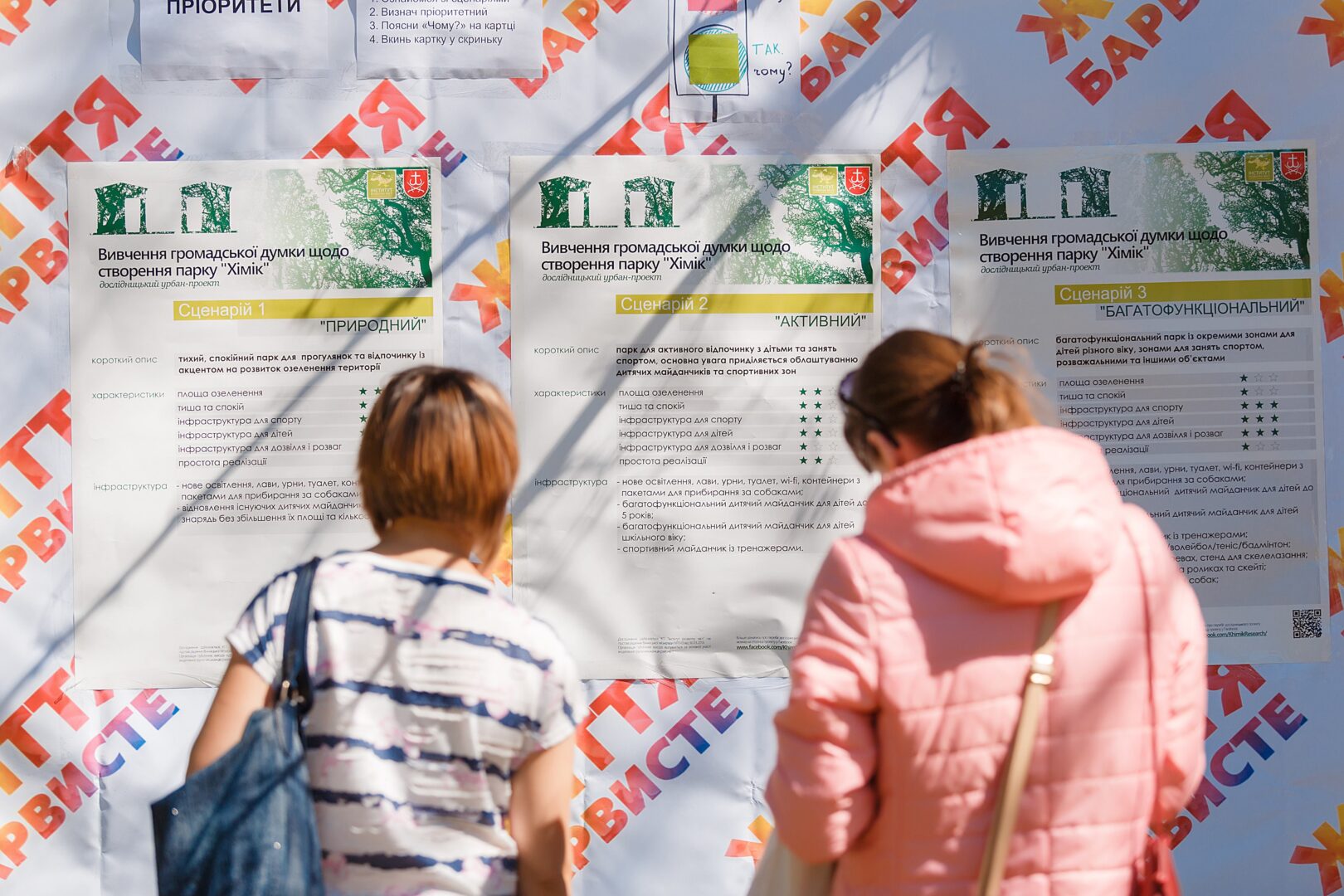 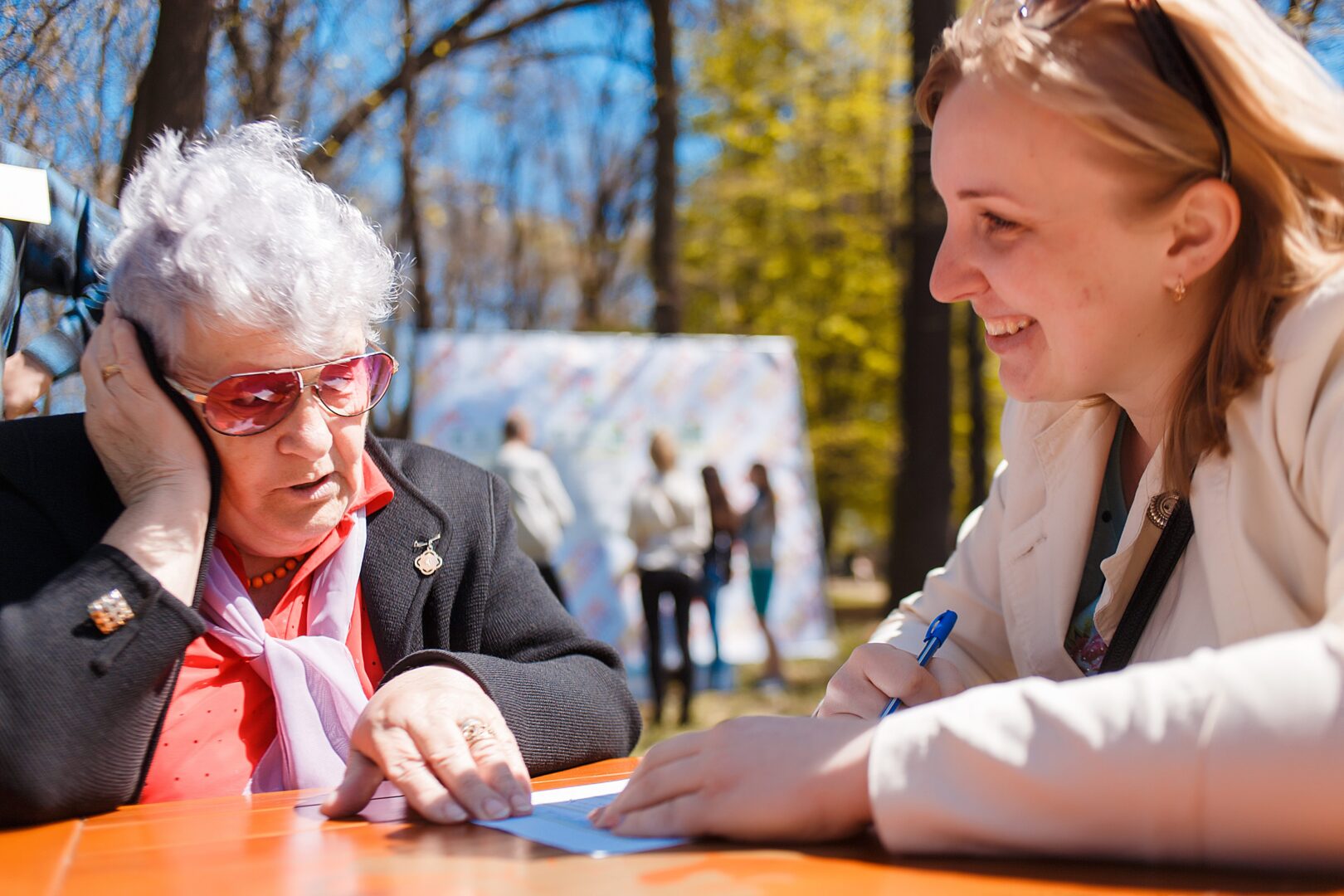 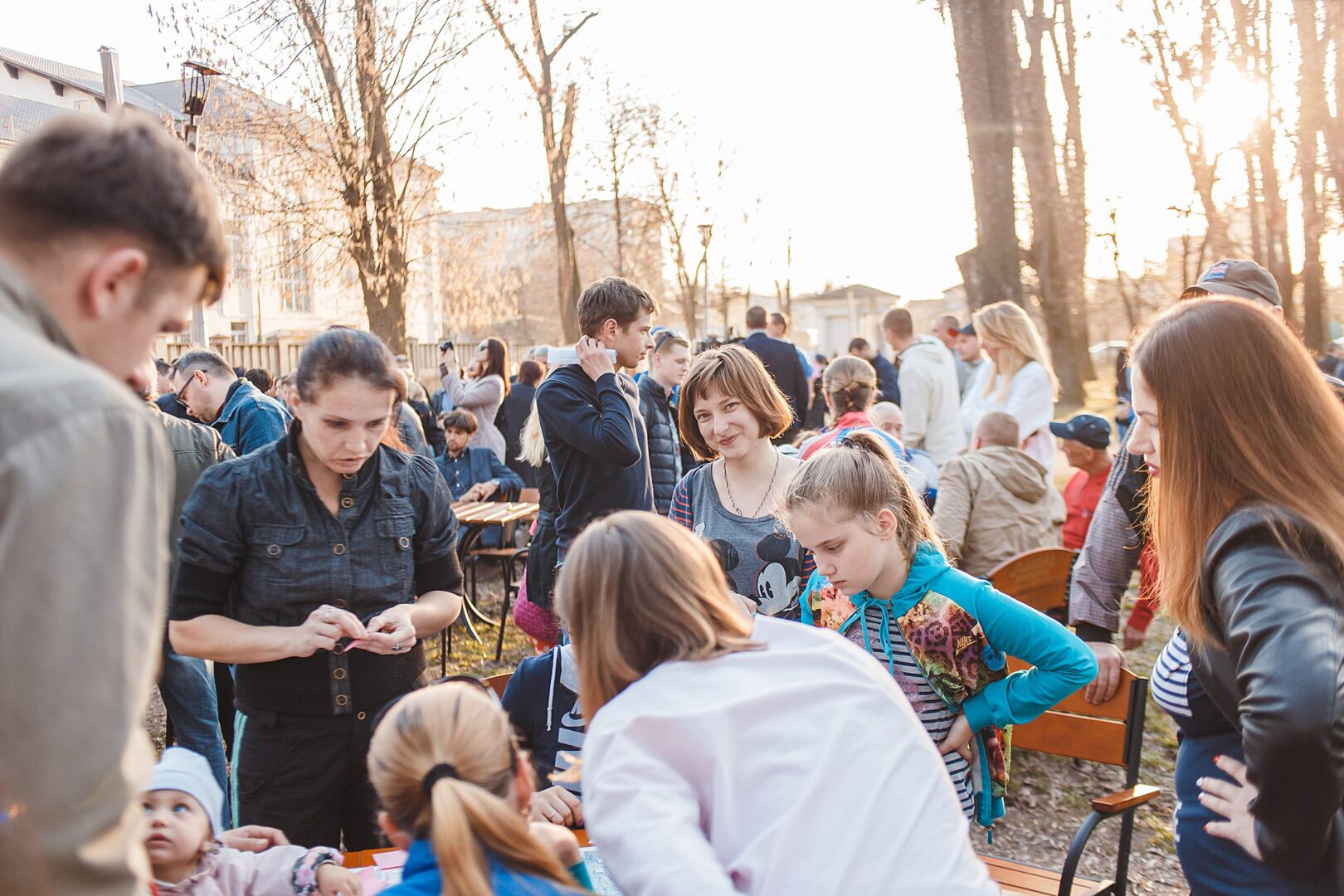 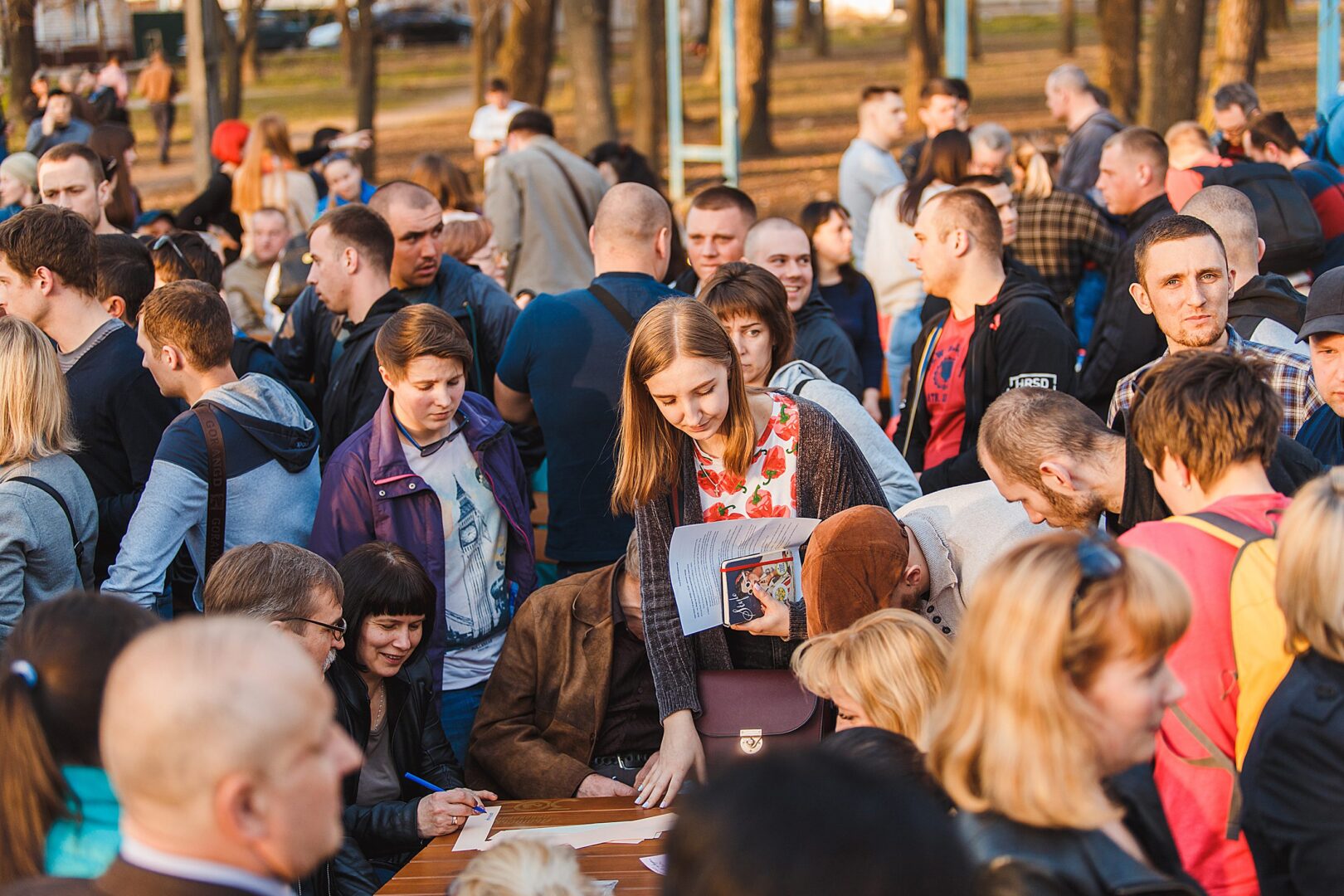 Reconstruction of Khimik Park: From concept to object

The Architectural Workshop was held in order to engage the best experts from Vinnytsia and from all over Ukraine to generate creative ideas for the park spatial planning solutions, develop its identity taking into account the opinions of local residents.

14 teams from Vinnytsia, Kyiv, Poltava, Lviv, Odesa and Pavlohrad applied for the workshop. – post (see more details). Three teams were selected to participate in the Architectural Workshop: from Kyiv, Vinnytsia and Odesa.

The following teams participated in the Architectural Workshop: 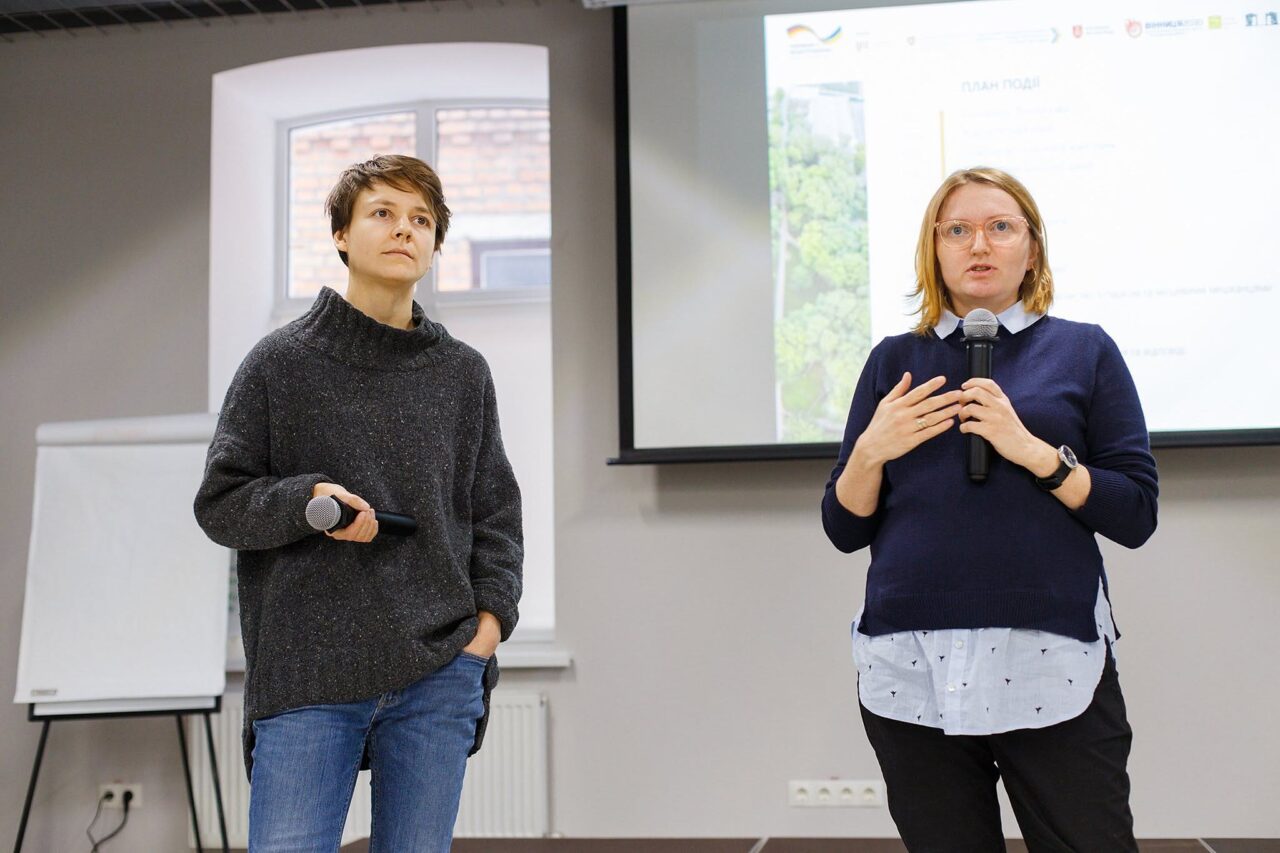 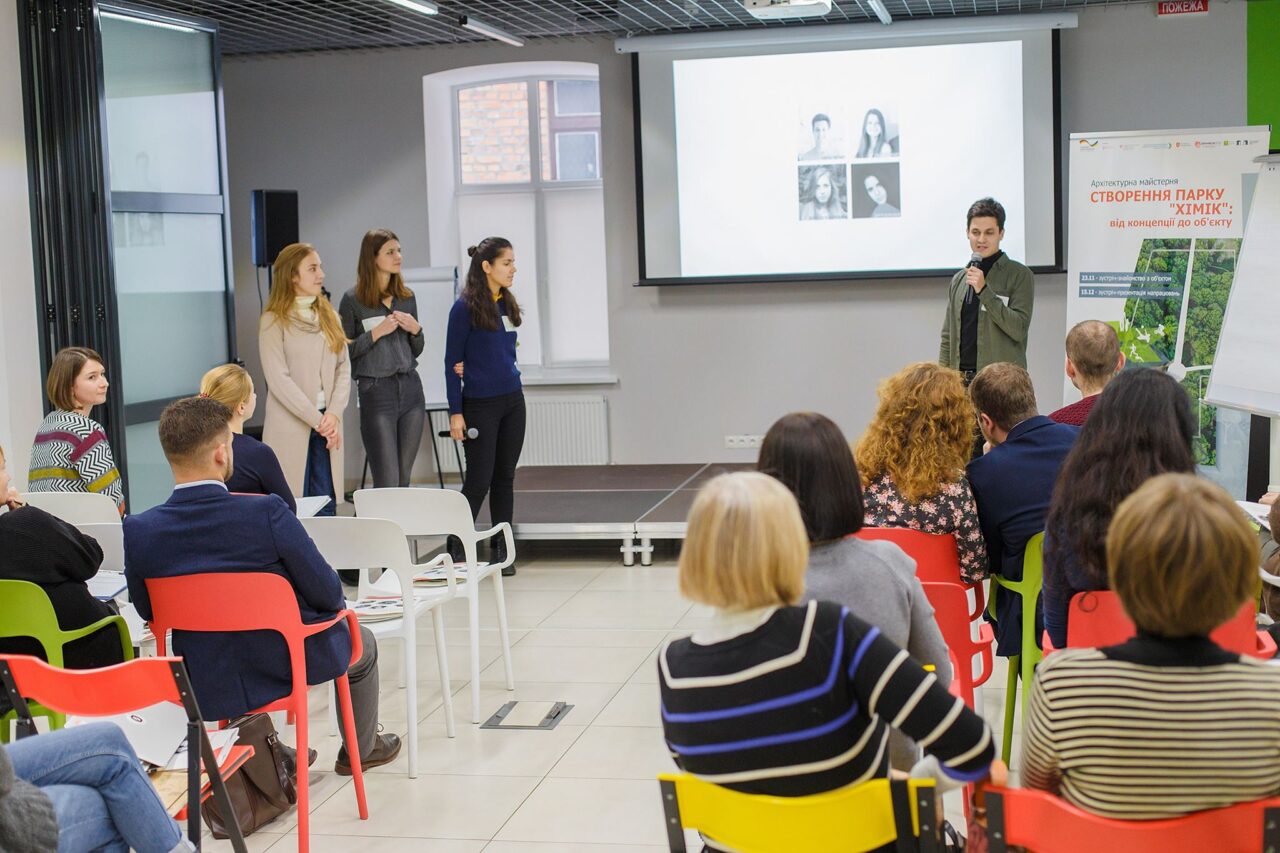 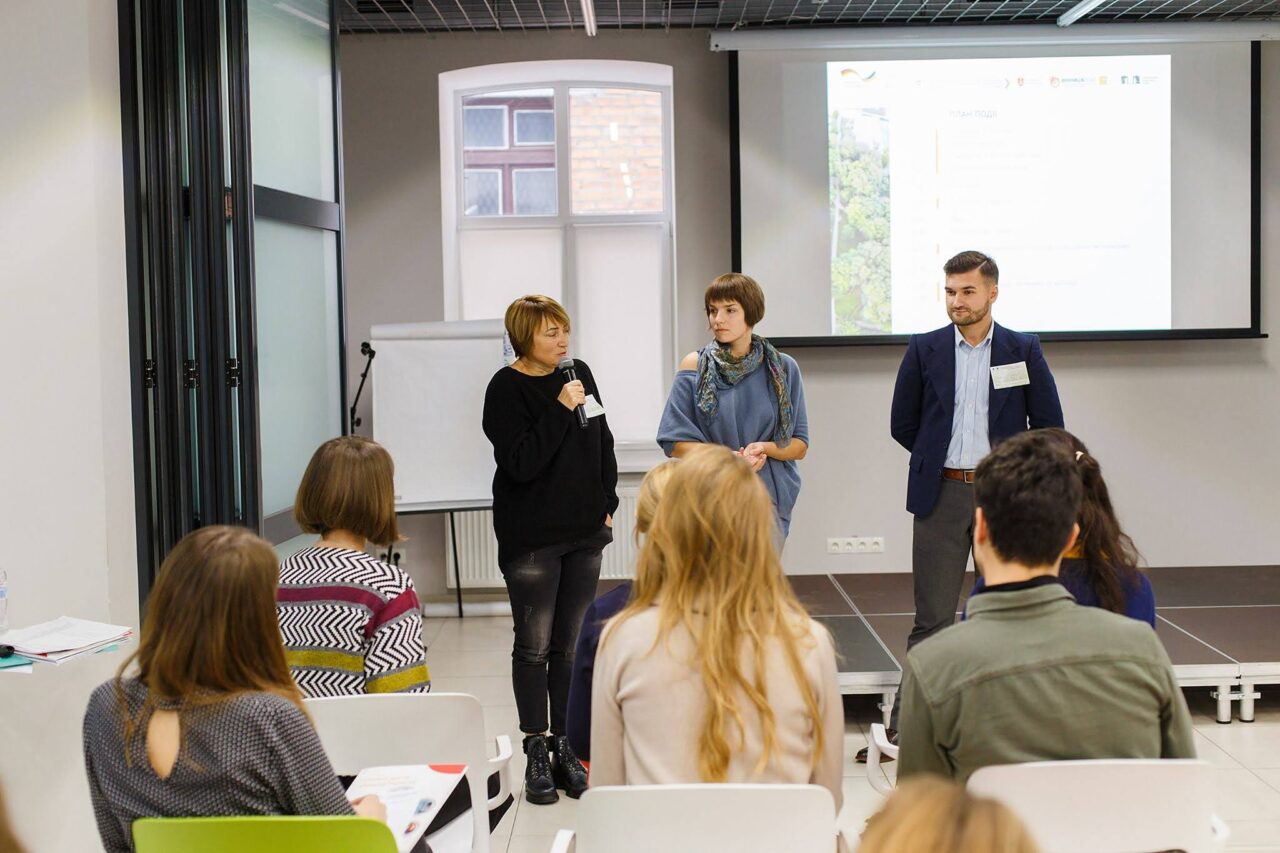 The team tried to reflect the different community sentiments regarding the park, so that everyone could feel that it belongs to them. The new zoning enhances the strengths of the park, makes the best use of the nature of its space, its natural features (lighting, shade, density of plantings, existing structures), reprograms those zones that do not use their full potential, and envisages provocatively active use of the area along the fence.

Explosion – a zone where children’s activities and sports create a dynamic atmosphere.

Blending – a zone of “blending” into nature where the feeling of a forest is preserved as much as possible.

Reaction – a zone for social interaction. 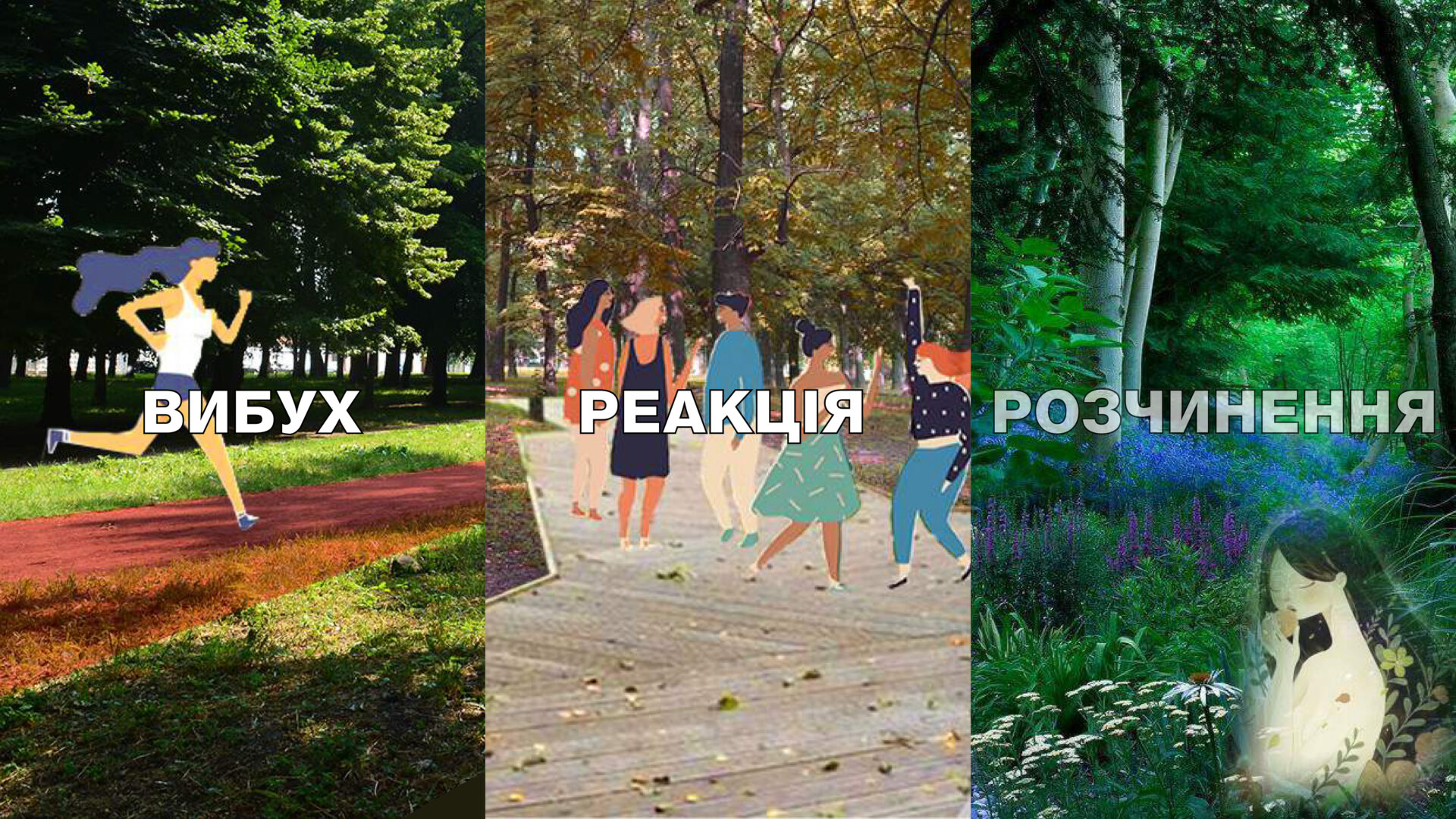 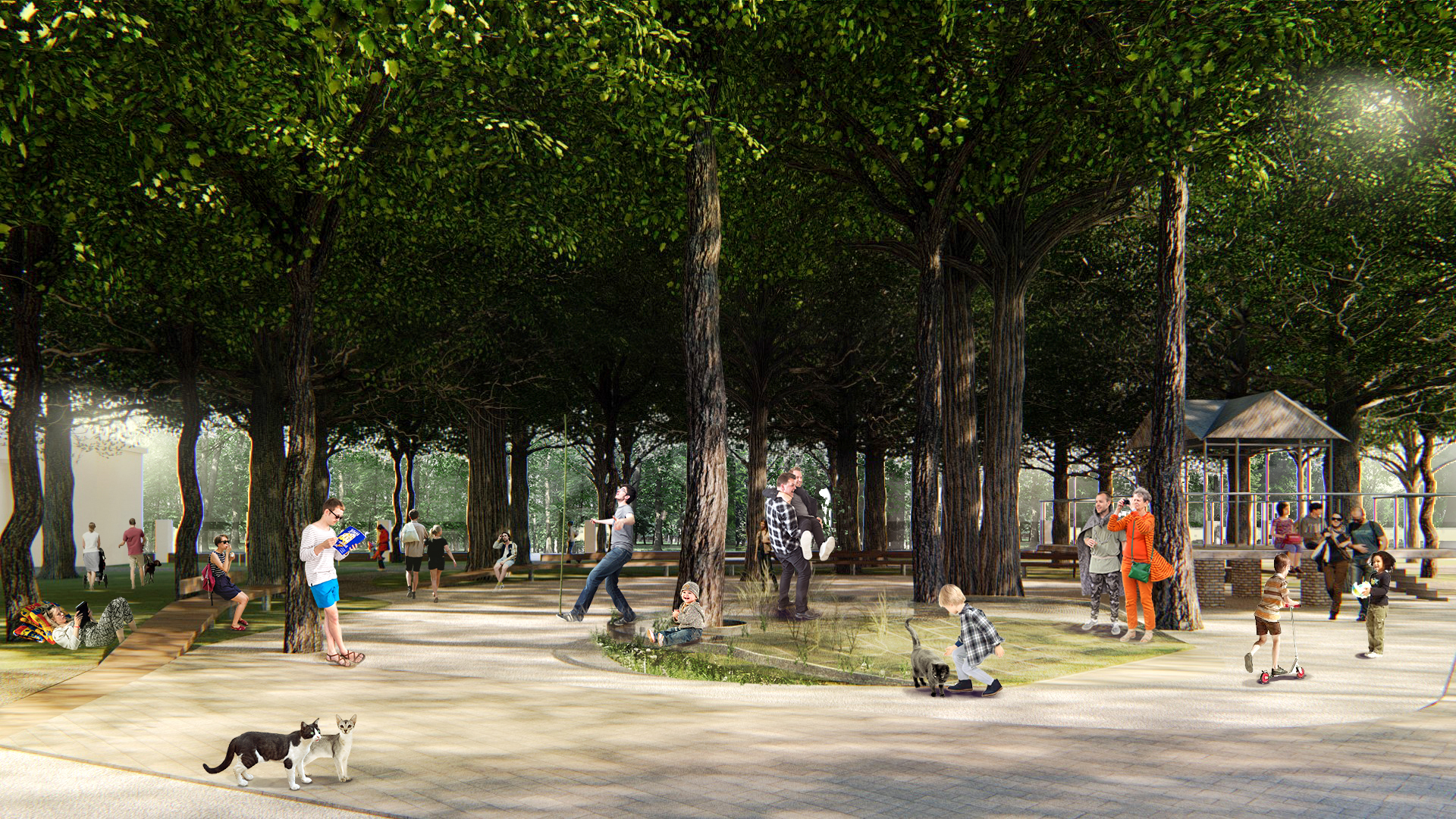 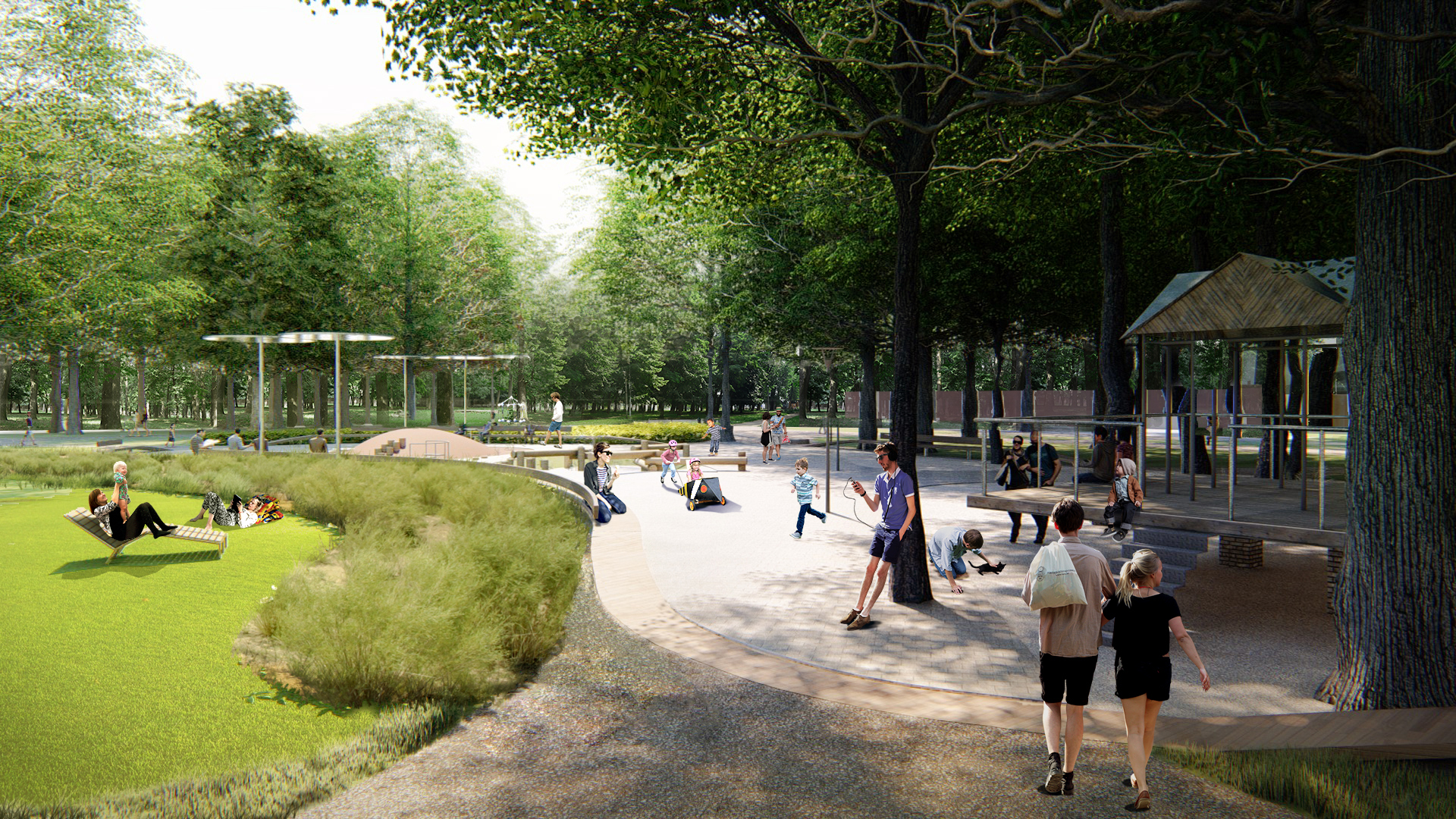 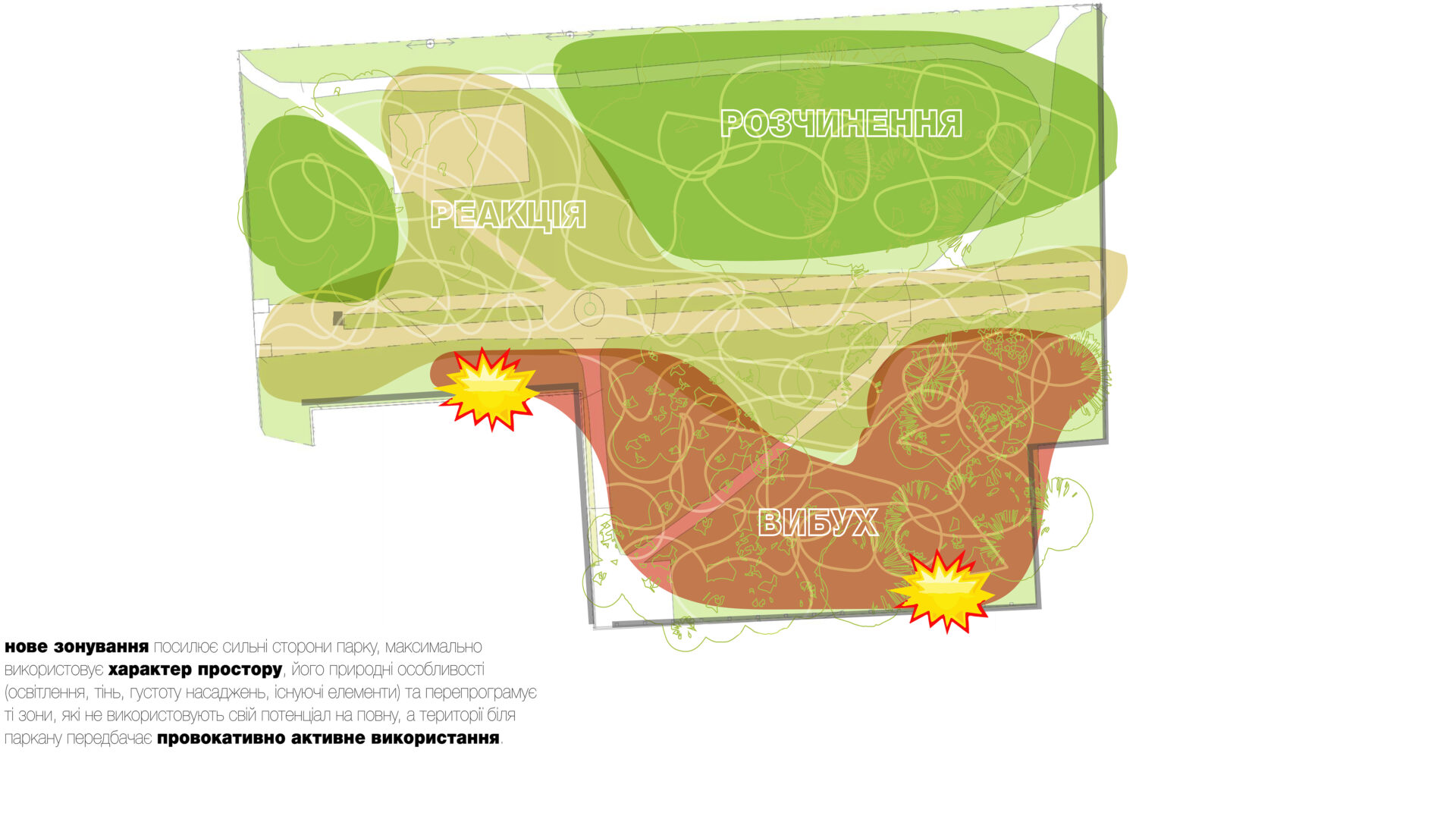 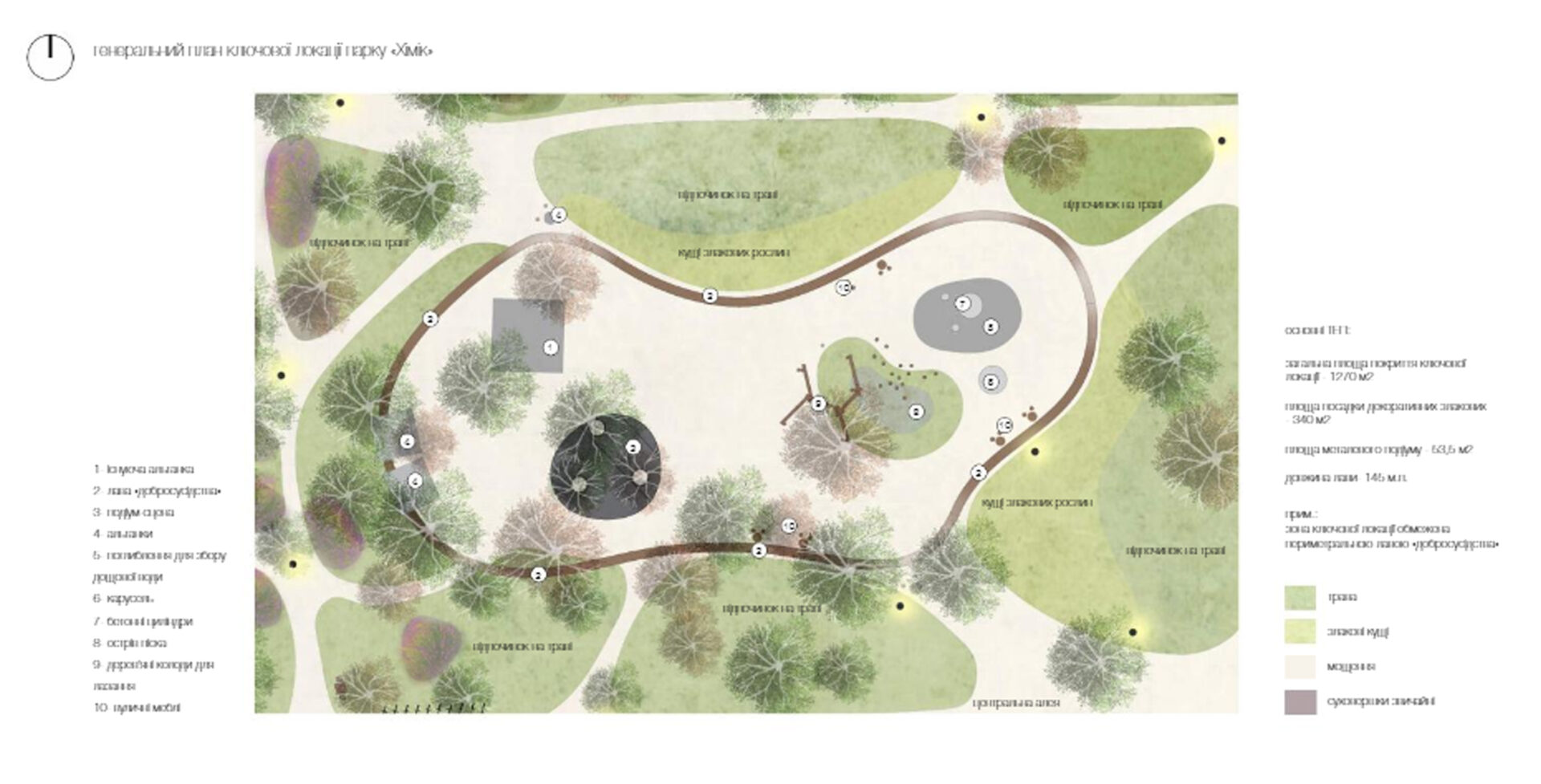 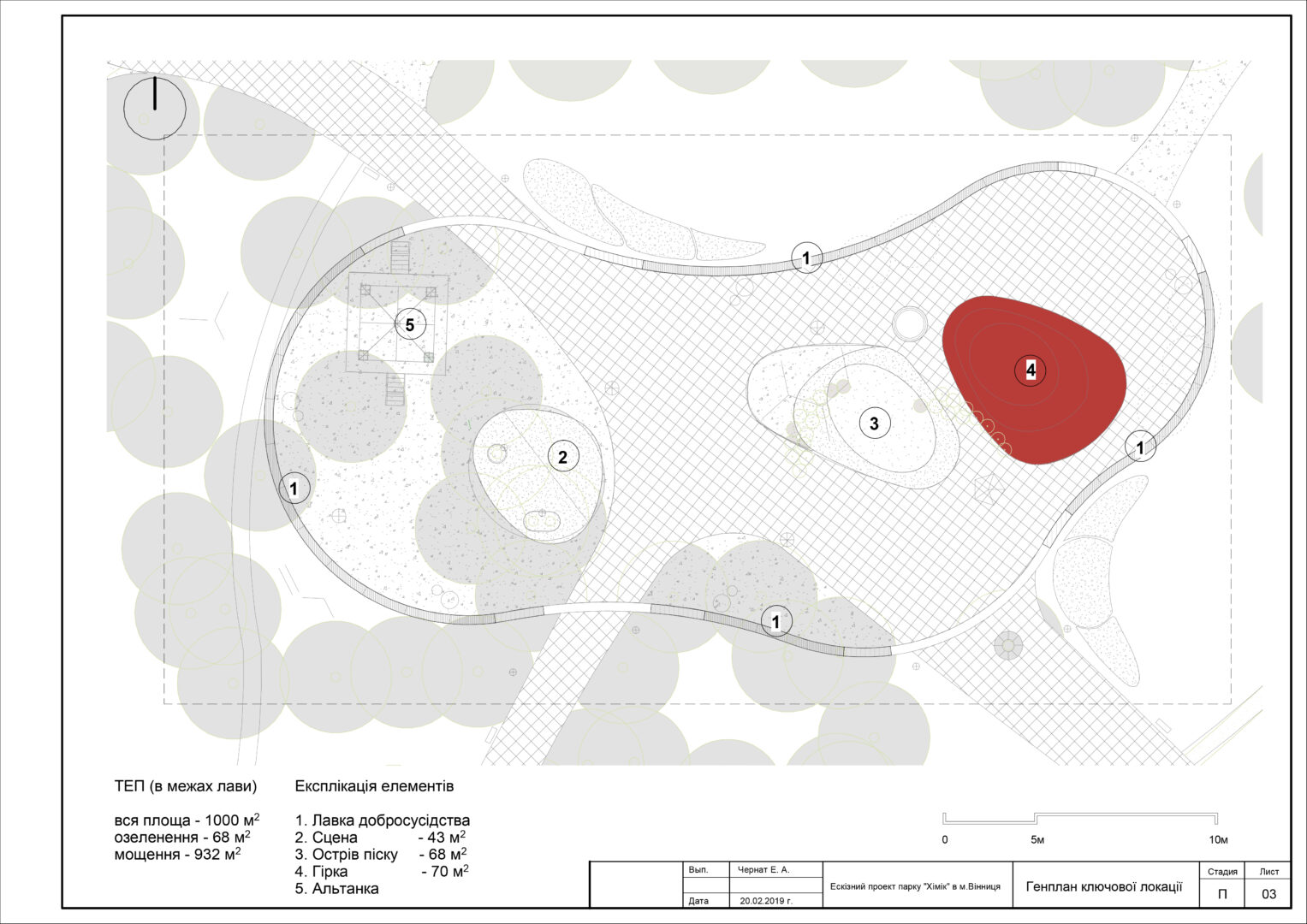 “We know that one day the active members of the local community will gather in the newly reconstructed park. There will be many discussions at that meeting. That’s why we offer a “good neighborhood” bench along the entire zone, which will unite all the activities and people,” says Yevhen Chernat

In June 2020, the design specifications and estimates were approved by the National Expert Review Panel. Invitation of tenders for the contractor and the commencement of construction work are scheduled for the summer of 2020. The reconstruction of the park will be carried out in several stages (spanning several years). The first stage involves the installation of lighting.